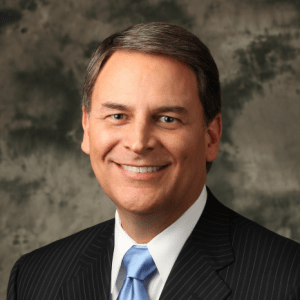 Jay Timmons, the president and CEO of the National Association of Manufacturers (NAM).

There are currently more than 364,000 job vacancies in the U.S. manufacturing sector, and by 2025 that number will climb to 3.5 million, says Jay Timmons, the president and CEO of the National Association of Manufacturers (NAM). However, about two million of those jobs could go unfilled because of a lack of skilled workers, a problem that many in the door and window industry are all too familiar with.

Because of that, he predicts that automation will play an even bigger role in manufacturing in the future. He also urges Congress to pass comprehensive immigration reform because “we cannot rob our country of some of the hardest-working people we know.”

Timmons made those points during his “State of Manufacturing” address on Monday at Automation Alley, a business association in Troy, Mich., that’s focused on high-tech manufacturing.

Timmons acknowledges that the general public sees automation as a threat to manufacturing jobs in the future. However, he sees it differently.

Timmons noted that Oakland County, Michigan, where Automation Alley is located, has added 19,000 manufacturing jobs since the Great Recession, a growth rate of 40 percent.

“Innovation is changing the way our industry looks,” he said. “But it doesn’t change what’s at our core: men and women who have lent their talents to build something bigger than themselves, people finding purpose in making things that matter.”

He said jobs in manufacturing are shifting, and they’re increasingly open to workers with a diverse set of skills that don’t have to be earned in a college.

“It’s not about white collar or blue collar,” Timmons said. “It’s about ‘new collar’ jobs — jobs that are high-tech, 21st-century, rewarding, well-paying jobs — even those that don’t require a four-year degree.”

Timmons said the recent tax-reform bill that was signed into law at the end of 2017 will have a huge impact on manufacturing.

“It is not possible to overstate how much tax reform matters to the future of manufacturing,” he said. “For decades, we weren’t playing on a level playing field. While we assumed America’s economic engine couldn’t be challenged, other countries got smart. They lowered their rates so they could win jobs, win business. But now, manufacturers are empowered to compete and win.”

One of the key provisions of the tax bill allows companies to immediately write off the full cost of new equipment. That could spur investment in new machinery and automation processes.

“We’ve seen a lot of great headlines and stories of businesses investing in their workers and communities,” Timmons said. “That’s just the beginning. We will create more jobs and hire more skilled workers. We will invest in more plants and attract more investment to our shores. And we will enhance pay and benefits.”

He wants U.S. to keep global trade open and free, noting that exports of manufactured goods to Canada and Mexico support more than two million workers at more than 43,000 manufacturing companies in the U.S.

“Let’s be clear, manufacturers always want America to negotiate the best deal possible,” he said. “After all, 95 percent of the world’s customers live outside the United States.”

Finally, Timmons said it’s important for the U.S. to welcome immigrants to the workforce.

“For manufacturers, getting immigration reform passed — and, most urgently, finding a solution for the ‘Dreamers’ — is a moral issue and an economic issue,” he said. “We cannot rob people of the only country and communities they know; and we cannot rob our country of some of the hardest-working people we know. And so I join manufacturers across this country who have united to say to Congress: stop playing politics with people’s lives. Get this done, so we can build an immigration system that rightly ensures our security, while also welcoming hardworking people who want to contribute to this country.”