Modular Construction: Is It the Future?

Modular housing is gradually gaining market share in the U.S., and one expert told members of the Window and Door Manufacturers Association (WDMA) that the segment could present a serious business opportunity for manufacturers in the industry while also easing the shortage of skilled labor in the construction field. 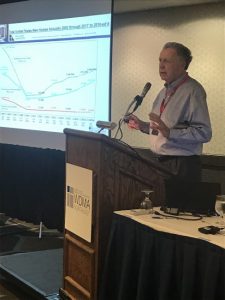 Fred Hallahan of Hallahan Associates gave a presentation on modular construction during the recent WDMA-Northeast meeting in Philadelphia.

Modular construction drastically simplifies the homebuilding process. Components are produced in a factory and shipped in sections or modules to a jobsite, where they’re fitted together by smaller work crews than are typically used to build single-family homes.

Because of that, modular construction could be an important fix for the shortage of skilled labor in home building. Hallahan said that about 87 percent of construction workers who were in the field at the time of the housing crash in 2008 have since left the industry. They’re being replaced by foreign-born workers, who now occupy 1 in 4 construction jobs, but the rate of replacement isn’t catching up with growing demand for housing.

That’s where automation could come in, Hallahan said. He cited the example of Blueprint Robotics in Baltimore, which DWM reported on in April 2017. The company uses a robotic assembly line to build walls for modular homes. Other robots then cut rough openings for doors and windows. After adding drywall, insulation and siding, a pneumatic gantry picks up the doors or windows, places them in the openings and secures them in place. Human carpenters then finish the fastening and flashing.

Hallahan said one of the biggest expenses associated with modular housing is transportation. If this could be minimized in the factory stage, it could boost growth. Additionally, a combination fabrication process of both panels and modules could  push current wall panel companies further into factory fabrication. That, in turn, could provide a new distribution channel for door and window manufacturers.

Current modular home manufacturers are not capable of making major changes to the modular home fabrication process alone. Hallahan said they need to work with material suppliers and component suppliers such as door and window companies, as well as non-housing technology companies, to evaluate the process to fully embrace new process advances within the factory and on the construction site.

Hallahan said modular home makers need to diversify their offerings to include more complex two-story homes within higher-cost metro areas, as well as townhomes and low-rise multifamily projects in those same regions. That, in turn, could provide even more opportunities for door and window companies, because all modular construction in the U.S. must meet state and local building codes, including thermal performance and impact ratings.

From 2011 to 2017, about 100,000 modular homes were built in the U.S., increasing 22 percent during that time. (By contrast, statistics from the U.S. Census Bureau show that more than 6 million new privately owned housing units of all kinds were completed during that time.) Most modular housing is being built east of the Mississippi River. The four biggest states are North Carolina, Virginia, Pennsylvania and New York. Since 2011, they represent about 35 of recent national output.

Hallahan said construction of modular business offices and kiosks has been flat for the past four years, with about 7,500 buildings going up annually. Modular educational units have been flat as well, with about 6,800 rooms added annually during that time.

The modular transient housing commercial sector fell from 2011 to 2017. This change was related to the rise and decline of “man camps” set up to serve the fossil fuel extraction industry in states such as Montana, North Dakota and Wyoming. This type of transient housing has been at about 1,100 rooms annually for the past few years.

Finally, Hallahan said several national hotel and motel chains are considering going to modular units, so there is considerable growth potential in that segment.