Missing One of Our Own

One of the greatest things about this industry is the people. You really do form relationships that quickly turn into friendships, as many of you know. Yes, we are industry colleagues first, but sometimes the lines are quickly blurred and you can’t help but call a particular colleague a friend. They ask about your kids, your spouse — bottom line, they just care about you. There are certain people who stand out, and for me Mark Toth was one of those people. 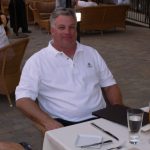 Mark Toth was a devoted AAMA member (he’s shown here at a meeting in 2006).

So when another one of my industry friends and colleagues, Jim Plavecsky from Windowtech Sales, emailed me on the afternoon of March 31 to ask me if I knew Mark had passed away, I was shocked. Mark was one of those great people who stood out. I knew him mainly from his time at HB Fuller, and then Momentive, and he was an expert in insulating glass.

As a regular at AAMA meetings, he was one of the first people who welcomed me in many years ago. He always had a hug (he did remind me of a Teddy Bear) and kind words. “How’s the family?” was one of the first things he would always say. He never greeted me with anything other than a big smile.

In fact, another one of his IG industry friends and colleagues, Rich Brevik from Argon Filling Systems, says that’s what he will miss most about Mark—his smile and his wit.

“I have known Mark more than 15 years,” said Brevik. “As both colleagues and friends. We traveled a lot together, went on a few fishing trips … He was very funny.”

He really was a friend to all.

“Mark had customers in every part of the USA and Canada, and knew stories of each one of them,” said Brevik. “He was a positive and friendly voice in the industry who shared a big smile with everyone he met, and he remembered your name when he saw you, even if it had been many years since your last encounter. His absence at national meetings will be felt by many.”

Jim and Mark have been friends since they both started working for Tremco together in the late 1980s, when Mark was in sales and Jim was in marketing.

“It was like boot camp,” Jim said. “We worked for someone who was a leader in Vietnam—a real tough guy. He would call us in if we were losing an account and he would ream us out and yell. We would just laugh about it later on over a beer.”

Jim was cracking up when he told me that story (and a few others) and had me laughing right along with him as he shared stories of Mark’s dry-witted humor.

Even when the two left Tremco for different companies, and even worked for competitors, they always stayed friends. “He was just an awesome guy,” said Jim.

No one knows that better than his family. Mark is survived by his wife Lynn, two daughters and a son. Brevik said Mark doted on his family and his increasing number of grandchildren.

Mark passed away a few days before I received that email from Jim on that Sunday afternoon. There was no obituary published and no service held per his wishes. His final resting place was perhaps fitting; his family reportedly scattered his ashes into his favorite fishing spot in a lake in Northern Minnesota.

He will be missed by all. If you would like to share a memory of Mark, please post a comment here. I know myself, Rich, Jim and others in the industry would love to hear them.