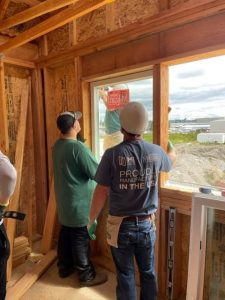 Two of the Milgard Windows and Doors team members install windows for the Tacoma/Pierce County Habitat for Humanity.

“Everyone was excited,” says Tim Large, a pricing manager at MITER BrandsTM who also serves on the MI Charitable Foundation’s Tacoma outreach committee, “because most of us, even though we work for a window company, had not previously installed windows.”

The highlight of the day, those involved said, was working with Tanisha, the person who would soon be the owner of the Habitat home. Habitat for Humanity stipulates that all housing recipients put in so many hours of “sweat equity,” and Tanisha was on-site helping to get her house ready for her family.

“It was great to see her get in her own volunteer hours with our group,” Large says. “It was a special and rewarding day to work with her on her family’s future home.”

Team members at Milgard’s Tacoma facilities have long supported Habitat for Humanity projects. A group of team members was at a similar location earlier in the year when the foundation was poured. As part of that endeavor, volunteers signed their names and wrote inspirational messages on the wood beams that frame the house.

As much as he enjoyed that project, Large was even more excited to take part in a build day. He finds the process of seeing a property transform into a suitable home especially appealing.

“I love the fact that we’re getting that much closer to move-in day,” he says. “I’m already looking forward to next year’s build day and maybe even installing more Milgard windows.”