MI Windows and Doors Donates Windows to Homes for Our Troops 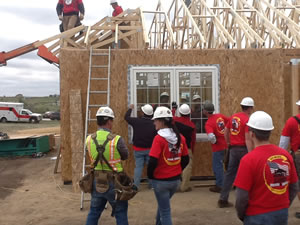 MI Windows and Doors (MIWD) donated and helped to install a complete window package of new MI EnergyCore windows for a Homes for Our Troops (HFOT) home being built in Parker, Colo., for Army Corporal Nick Orchowski and his family.

Army Corporal Nick Orchowski was on his first deployment when he was left a quadriplegic after being thrown from the gunner’s hatch of a vehicle that was hit during an insurgents’ attack, in Baghdad, Iraq in May 2004. Married only four days before deploying to Iraq, CPL Orchowski was the main gunner of the lead vehicle in a convoy, when they came under attack while on the main supply route leading into Baghdad. Orchowski suffered fractures of C4, C5, and C6 vertebrae and was immediately paralyzed from the neck down.

Mike Schnitker, MIWD regional sales manager, assisted with the installation. “It was satisfying knowing that these MI EnergyCore windows are going to such a good cause. They installed easily and I was proud of the job that our team did to produce such a quality product. These windows will provide Nick with many years of energy savings.”

Orchowski also expressed his thanks. “Thank you for your support and kindness, not only have you honored me as a veteran of combat, but you have also changed my family’s lives as well. I will no longer have to adapt to the un-adapted. I have had to rely on other people to help me with most things; in my new home I will be able to be more independent. Homes for Our Troops and their volunteers and donors depict the True American Spirit! Thank you,” he said.