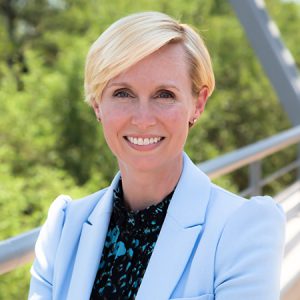 Meagan McCoy Jones has been named president and CEO of McCoy’s Building Supply and assumed her position June 1. Jones will be responsible for overseeing the company, headquartered in San Marcos, Texas. Jones succeeds her father, Brian McCoy, who is retiring after a 50-year-career with the company, having served as CEO since 2001.

Jones is the fourth generation of the McCoy family to lead McCoy’s Building Supply. Though she’d been working summer jobs at McCoy’s since she was very young, she officially joined the company management team in 2007, as an assistant manager at the company’s Austin Manchaca location. Jones’ role in the company expanded over the last 10 years, and she has served as president and chief operating officer since 2018.

“A company like ours doesn’t succeed over this many decades without hard work, hustle, and the deep loyalty of our team and trust of our customers. I’ve grown up at McCoy’s with the patience, help, and support of so many. Through them, I fell in love with our business and industry,” said Jones. “Being a private, family company is an advantage and privilege, and we don’t take that for granted. We continue to invest in upgrading stores, building stores in new markets, and growing our distribution, manufacturing, and delivery service so customers can count on McCoy’s for decades to come.”