Marvin and Trustile Welcome the Year on Positive Notes 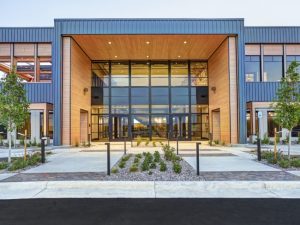 Trustile’s new headquarters features an abundance of windows, all made by parent company Marvin.

Employees of door and window manufacturer Marvin and its subsidiary Trustile began on positive notes this year—including an abundance of new space to enjoy at Trustile in the days ahead and profit sharing at Marvin, despite a pandemic. In the final weeks of December, officials for Marvin announced that after “rebounding from a significant drop in sales early in the pandemic and avoiding layoffs,” the company upheld a 63-year tradition by sharing more than $15 million in profits with its employees—more than in 2019.

“I am most proud of the resiliency and adaptability of our teams,” said Darrin Peterson, president of Marvin. “Each of us worked through our own personal challenges and at the same time adapted to new ways of working. We found new ways to thrive, accepted change, and persevered through some notably difficult times.”

Then, yesterday, officials for the design firm Ware Malcomb announced the completion of a new corporate headquarters for door manufacturer Trustile. The new 310,000-sq.-ft. facility consolidates the company’s operations from four buildings to one, while doubling the square footage of each unit. Marvin acquired Trustile in April 2015, announcing it would operate the company as a separate business unit, retaining its national network of dealer partners and senior management. 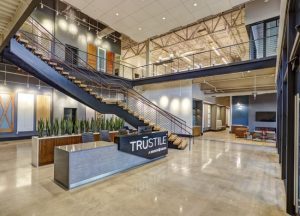 The new location consolidates operations from four buildings, while expanding square footage for each sector of operations.

Advantaged by its parent company, Trustile’s new facility incorporates an abundance of windows and glass, designers say, tying together internal spaces, while also ensuring that open office areas and amenities are located near fenestration (all manufactured by Marvin). The location is also designed to doubles as a showplace, by utilizing Trustile doors throughout the facility, while leaning on furniture, lamps and accessories, such as books and houseplants, to match a residential feel.

“The entrance and office areas were specifically designed as a living, working showroom to have as much of a residential feel as possible,” said TruStile president and COO, Jeff Elkin. “We needed to use these spaces in a way that highlighted the brands that we as a company represent, so that the architects, interior designers, builders and dealers who visit could picture our products in their projects.”

The design team also ensured that the layout of open office areas were near windows as much as possible, officials for Ware Malcomb said in a press release, adding, “By incorporating windows in the training room and at various points in the office, architects and designers touring the space can also get an inside look at the 260,000-sq.-ft. production area.”

On its north side, the development features a two-story mechanical building, housing a bio-mass boiler. The boiler converts sawdust produced from door manufacturing into energy, which is used for heating and cooling.

“It’s true that all of this—all of our planning and decisions—really flowed from the value of doing the right thing,” said Scott Schmid, TruStile’s CEO. “One way we can do the right thing is to make a facility as environmentally conscious as possible, and that is just what we have done in Denver. As I look forward, I feel good that it will serve our needs for years to come.”

Ryan Companies Inc., headquartered in Minneapolis, served as general contractor for the project.