Claudette Reichel knows there’s not much we can do about Mother Nature’s fury, but she says the kind of hurricane-proof and wind- and flood-resistant design that can be found at the LaHouse Resource Center’s demonstration home on the campus of Louisiana State University (LSU) is proof enough that we can at least lessen the damage. 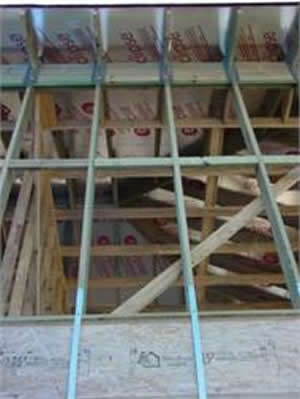 “Safety, of course, is the most important thing,” says Reichel, the director of LSU’s AgCenter LaHouse in Baton Rouge, “but not just to mitigate the impact the aftermath has on businesses, but on communities and on the everyday lives of people involved. [Hurricane-proof and wind- and flood-resistant design] can save our country a great deal of money, can save our communities a great deal of money and spare people from that awful ordeal.”

Reichel has been busy for years preaching to Louisiana residents about the importance of making their homes more flood- and hurricane-resistant. Nothing, however, drove the message home more so than the destruction of Hurricane Katrina in 2005. Things were dire for the entire Gulf Coast region then, but Reichel and others know it could have been worse still had the storm’s powerful winds not tapered down somewhat before coming ashore. Most of Katrina’s damage was flood-related.

LaHouse was still under construction when Katrina hit and it remained unfinished until 2008, allowing visitors to see its unique foundation designs, sheathing and hardware. LaHouse was completed in 2008, by which time post-Katrina state building codes had toughened.

LaHouse is what Reichel hopes to see more of to avoid such catastrophes in the future. Designed as an actual home with a kitchen, den, bedroom and bathrooms in roughly 3,500 square feet, the house is a walking billboard for all the different types of affordable, home protection available.

Hurricane straps and hardware anchor the roof rafters to the studs and keep the studs locked onto the house’s foundation. Keeping the wind out is the primary concern during a hurricane and LaHouse showcases various ways to do just that. Dependable Glass, a New Orleans-based fabricator of architectural glass, has provided a number of different types of glass, including break-resistant glass for some of the window areas lacking additional protection. Three types of impact glass can also be found, while other preventive measures include six varieties of shutters or window coverings on the house’s exterior.

“This shows that you can mix and match, depending on your architectural and design needs,” Reichel says.

LaHouse’s ten different types of doors and windows can be aesthetically-pleasing as well.

Other features designed to resist the elements include an impact-rated garage door and an impact resistant fabric screen designed to protect the porch. The screens are installed on an overhead track and hang like draperies, set to be closed when a storm approaches and attached to anchor bolts.

Finally, the master bedroom in LaHouse doubles as a safe room of sorts. Because most homes in Louisiana are not built with basements, it offers a relatively benign area in the home where hurricane straps are attached to all the studs, and walls and ceilings sheathed in layers of 3/4 –inch plywood, Reichel says.

Built to be affordable and equally as energy-efficient, LaHouse is open to the public each week, Monday through Friday and open on Saturday’s just once a season.

“It kind of gives us some control over what’s happening to us,” Reichel says. “It keeps us from being a helpless victim of Mother Nature.”