Customers looking for new products at GlassBuild America, which took place last week in Las Vegas, didn’t have a problem finding a variety of options to meet their needs. From window systems to components, exhibitors had plenty to showcase.

Quanex Building Products had a large variety of products on display including its EcoBlend, which Mark Gallant described as an innovative direction for the company.

“The product can be fabricated like wood in the extrusion process and presents an alternative framing system to wood,” he said.

Gallant added that the product is a great fit for replacement companies or millwork distributors as it’s a nice “step-up alternative without the higher cost.”

“We are taking guidance from the Europeans who consume more waste than they output,” he said. “The materials used here would otherwise go in the waste stream …. This also allows companies to differentiate themselves from all the other white vinyl windows out there.”

It was only halfway through day one of the show and Josh Snyder of Hornschuch said he was glad to speak to several smaller window manufacturers at the event who are looking for ways to differentiate. 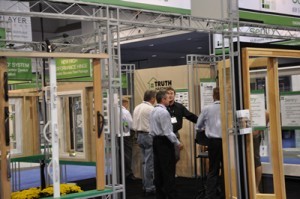 Truth now has a variety of door products to complement its casement products.

“We were definitely pleased and already have a stack of good prospects,” added Matt Kottke Truth Hardware, midway through day one.

In fact, he said there was more interest in his company’s Sentry patio door than any other product introduction at this show or previous shows. The company now offers a full portfolio of door products to complement its casement products.

“Truth’s new Bi-Fold Hardware allows us to participate in a market that will only grow larger,” added Dave Johnson. “You can take a modest square-foot house and use this door system to let the outside in.”

At Amesbury Group Grant Skippen reported that the company launched a new line of casement hardware—“the one hole that will missing from the company’s product line.” He said the new line received a tremendous amount of positive feedback.

Lawrence Industries introduced a variety of new products, including its composite pivot bars and Brandon Lawrence reported that its plated hardware has “taken off.”

Strybuc introduced a variety of products as well and also had its brand-new catalog for attendees, which was a huge draw.

Eclipse Architectural introduced a screen that can be as large as 24 feet wide and ten feet high, said Norman Griffith. The screen also comes with different mesh systems depending on customer needs such as one for bugs, to block UV, for pets, etc. 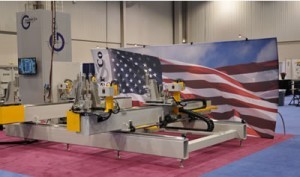 Greller introduced a new machine and proudly proclaimed its Made in the USA products.

The machinery suppliers were out in full force and Greller and Co. introduced a new four-point horizontal welder. Patrick Greller said this is a great addition to its line of vertical welders and that the reception has been great.

“This has taken off like there is no tomorrow,” said Doug Seandel. “There is a tremendous amount of interest here.”

One of the trends seen at the event is vinyl moving more and more into commercial applications and that was evident at many booths including Westech. The company introduced a new European tilt-and-turn-style window, according to Peter Eigenmann, who even went so far as to deem it “the best-performing window that money can buy.”

“We have had a very strong response,” said Eigenmann. “Our fabricators are getting requests for this type of product and it allows our customers to be in the commercial arena as well.”

This was also the case at Rehau. Greg Koch explained that its steel-reinforced PVC products are being used increasingly in the commercial market. Additionally, one of the company’s windows are passive house-certified and builders are using the product on a group of homes.

With the trend toward commercial applications, David Harris of American Renolit explained that its new commercial finishes are becoming more popular.

“Our finishes that look like aluminum are being very well received,” he said. Harris added that the company conducted real weathering comparisons over ten years in Arizona and Florida, which he said showed how “acrylic-based foils far outperform PVC.” But whatever the product, many say working with the customer and flexibility are key.

“We are all about being flexible—no matter what the product,” said Rehau’s Koch.