Imagine waking up to find out that one of your biggest suppliers is going belly up and with a stack of backorders there’s no product on the way. Now imagine getting that call amid the logistical nightmares associated with a global pandemic. 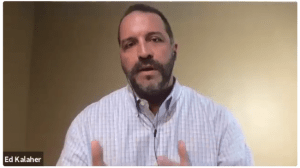 But this wasn’t his first go-round with such critical moments. Kalaher also remembers his fax machine (how the industry used to receive orders) coming to a screeching halt 19 years ago today, following the tragic events of 9/11. Obviously, everything turned out okay for his business.

Those were just some of the tense moments shared by Kalaher and Jeff Jackson, president and CEO of PGT Innovations, as they reflected on the past six months amid COVID-19. The two served as panelists for “The Door and Window Industry in a Post-Pandemic World”—one of two dozen sessions hosted as part of GlassCon Global VE-Glass Expo VE. The event took place Wednesday and Thursday this week, proving to be one of the more realistic attempts among online trade show experiences. While Kalaher and Jackson were patched in via Zoom, attendees made their way from a virtual show lobby to an auditorium to join their session—much the way you would at a live event.

Moderated by [DWM] publisher and editorial director Tara Taffera, the session looked to peel back the layers of the past six months, looking at how COVID-19 has impacted the manufacturing and dealer segments.

“Jeff, we interviewed you for our podcast back in March, when all of this was starting, and at that point we talked about how it was so hard to plan—almost impossible. Tell us where you are now with your operations,” Taffera said. 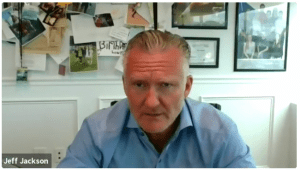 “Back then it was just information,” Jackson said, to the point of overload—including misinformation. “No one knew what was going on and so there was a lot of fear,” he added. “Over the past four months, we’ve seen a calming of that fear.”

Jackson recalled a time when someone came down with the flu at one of his company’s facilities.

“The next day, 90 people wanted to walk out of the plant,” he said. “Managing all of that fear was probably the toughest thing to do as a leader, because you’re dealing with people’s emotions.”

Kalaher and Jackson said they overcame those issues by implementing detailed plans. From increased sanitation and masks to beefed up communications—the measures they rolled out amid the early stages of the pandemic have kept their companies operating, they said.

“After people saw all of the things we’re doing to keep them safe, that’s brought a sense of calm and peace to our team members,” Jackson said. “Now, we’re seeing very little turn over as a result of COVID-19.”

But any turnover exacerbates a problem that both panelists said they continue to struggle with: labor shortages. PGT Innovations is currently around 175 employees short, even after hiring over 100 in recent weeks, Jackson said. Kalaher said his company is sitting on a stack of backorders, without enough installers. Both, however, are thankful to have those issues, as they say the door and window industries continue to roar, even amid a pandemic.

“In March, April and early May, we were adjusting to a new normal … shortly after that, as people began to breathe and adjust, we saw the opposite happen of what we expected,” said Kalaher—including a major upturn. “That was a quick roller coaster ride to adjust to and recover,” he added. “Now, we’re rapidly expanding and have a backlog.”

Looking forward, both panelists admitted that it’s become more or less impossible to stick a dart in which way the market is heading, though both remain confident after seeing how housing and remodeling have held up. In an election year and with stimulus efforts fading, both agreed that there are no definitive answers.

“How do you plan financially when you don’t have a sense for how long this will last?” Taffera asked.

On the retail side, Kalaher said his company’s strategy includes guiding its dealers through practical approaches to withstand any possible ups and downs.

“It really goes back to being disciplined,” he said. “Especially in their approach to things like overhead and fixed costs.”

At the same time, he’s hopeful that housing will remain strong, even as retail takes a hit.

Jackson was equally optimistic but said that his company has struggled to obtain certain materials. “What we’re seeing on the factory side is supply chain disruptions in glass and metal, which has disrupted the manufacturing process,” he said. “We think we have a pretty good handle on the next six months,” Jackson added, “but that depends on the economy, the election, COVID-19 and any possible vaccinations.”

Ultimately, both panelists said they take current demand and recent upticks in construction as positive indicators that the industry will remain strong through an economic lull following the pandemic.

“I remain really optimistic, because I can’t tell you how many stories I’ve heard from friends, family and acquaintances about how people want to invest in their homes the more they’re there,” Kalaher said. “I think we’re in pretty good shape with housing and remodeling.”

Regarding how the pandemic is expected to change their companies, both agreed that virtual formats will likely remain a part of doing business. Regarding video conferencing, “To be honest with you, it drove me crazy in the beginning,” Jackson admitted, adding, “But I think it’s here to stay. These virtual meetings are just more efficient and easy.”

Kalaher said the technology has actually increased camaraderie among his employees.

“Now I look at this and say, ‘Why weren’t we doing this before? We’re even more connected,’” he added. “One thing is … it’s good to use this as a wakeup call moment—to realize that the difference between marginal and highly successful businesses is discipline … virtual will be here to stay, but how are we going out and finding new customers? I think that’s going to change a bit because of the current dynamic.”