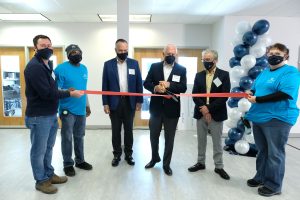 JELD-WEN celebrated the grand opening of its new VPI Quality Windows manufacturing plant this week by announcing it is adding a second shift ahead of schedule, creating approximately 20 new jobs. JELD-WEN announced in May 2021 that it would invest $8 million in Statesville to establish the new production facility, with an annual payroll impact of more than $12.1 million per year, and has committed to creating at least 235 new jobs at the new facility over the next five years. JELD-WEN currently has 685 associates in North Carolina. 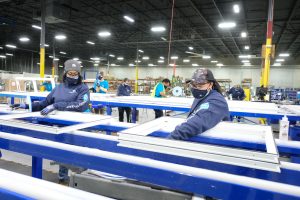 A second shift of workers started ahead of schedule at the new VPI Quality Windows manufacturing plant in Statesville, NC.

“We expect to significantly grow our multi-family and commercial window business through this investment as well as our innovative and energy-efficient solutions,” said JELD-WEN chair, president and CEO Gary Michel. “We chose Statesville for its geographic location, qualified labor pool, and logistical benefits. We have been pleased with the skilled workforce in Statesville and are looking forward to growing together here.”

More than 30 associates were working on one production line on Wednesday to manufacture custom windows for commercial and multi-family residential buildings for customers in the Eastern U.S. The second shift will be added in two-to-three months. Ultimately, a JELD-WEN press release states, the Statesville plant will have four production lines and approximately 235 associates.

The company’s expansion is being facilitated in part by a Job Development Investment Grant (JDIG) of up to $2.2 million over 12 years.