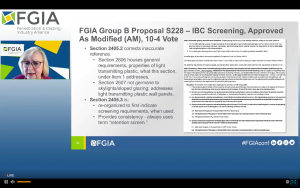 The fenestration and glazing industries should prepare for an increased focus on U.S. code updates, says Kathy Krafka Harkema, Fenestration & Glazing Industry Alliance technical operations director. She told participants at the FGIA 2022 Virtual Summer Conference last week that the Department of Energy will use $225 million from the bipartisan infrastructure law to help America reach its energy goals for 2035 and 2050.

In a Wednesday, June 8 session, Krafka Harkema advised that the industry can expect to spend more time and money in the near future on code updates.

“So the federal government is inserting itself and believes it is its job is to optimize the building code adoption process,” Krafka Harkema says.

For example, codes received additional clarification with respect to definitions, window fall prevention and screening. The Group B public comment filing deadline is June 20 with public hearings set for mid-September 2022. The final action could be posted at the start of 2023.

The ICC board has also greenlit a recommendation to include two committee action hearings for Group A and Group B cycles starting in 2024 for the 2027 international codes development. She explained that in the most recent cycle, the publication of the codes was delayed because of the large amount of public comments received toward the end of the cycle.

“They believe it’s important to give the committees two chances to look at those code proposals up front and early on in the code process,” Krafka Harkema says. “Their goal is then to hopefully have fewer public comments to have to deal with at the end of a cycle.”

In reference to the International Energy Conservation Code, Krafka Harkema says more changes and requirements are in store for U-factor and solar-heat gain coefficients. The IECC, now with its own standards development process, includes multiple committees such as residential, commercial and more, as well as subcommittees.

Krafka Harkema says most of the subcommittees completed their code work in May with some finishing in June. Public comment draft one is expected in mid-August, with IECC publication eyed for fall 2023.

“There’s a lot of pressure being put on our industry to make our products much more energy efficient,” she says.