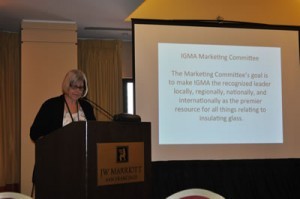 Among other topics she discussed, Margaret Webb, IGMA executive director, paid tribute to several industry members who passed away during the year at the Annual General Meeting during the 2014 Winter Conference in San Francisco.

The Insulating Glass Manufacturers Alliance’s (IGMA) 2014 Winter Meeting, taking place at the JW Marriott Union Square in San Francisco, has kept attendees busy this week, . Topics discussed during this week have ranged from marketing and new board members, association updates and much more.

A number of other associations were represented during the afternoon session of the Wednesday IGMA meeting and those attendees had the opportunity to provide various news items and updates. They included:

At the close of the meeting it was announced that Bob Spindler of Cardinal will be stepping down from the board. This week’s meeting marked his last as the chair of Technical Services.

Later Wednesday evening, attendees were treated to the “Back to the Sixties” President’s Theme Dinner and Dancing.

Thursday morning opened with the Annual General Meeting. To start, Bill Briese of GED Integrated Solutions, Robert Grommesh of Cardinal IG and Jeff Haberer of Trulite Industries were named to the board of directors.

The marketing committee also met and briefly reviewed upcoming plans for the association, including the announcement that the Summer Technical Conference will be held in Quebec City August 5-6, 2014. Margaret Webb, IGMA executive director, announced that the publication to reduce instances of thermal stress is now available and all members in good standing will receive their complimentary copy.

As part of the general meeting, Webb gave a tribute to the members of the industry who passed away over the past year. She announced that following the death of IGMA’s administrator, Allison Beck, members of the group joined together to raise money to help fund her daughter Caitlyn’s education. Webb stated that a total of $12,000 had been raised for the education fund.

Additionally, Webb paid tribute to editor John Swanson who lost his battle with cancer in January; Jim Spetz of Jim Spetz Testing, who passed away suddenly in December 2013, and Greg Carney of C.G. Carney and Associates who passed away in November 2013. Members participated in a moment of silence for the deceased.

Following the general meeting, attendees listened to a safety presentation from Mike Burk of Quanex Building Products for the Glass Safety Awareness Council. He reported that there had been no fatalities or serious injuries resulting from improper glass handling that he knew of since his last report in Halifax, Nova Scotia last August.

He also stated that safety was still a concern in the workplace. Though the number went down from the past year, on average 12 people died on the job in 2012 according to labor statistics, he noted. Burk also stated that employers need to have a zero-tolerance policy for any employee under the influence on the job. This includes employees who use medical marijuana or who may still have alcohol in their systems from the night before.

The Certification and Education committee then met, with Webb opening up discussion about linking educational seminars to the summer technical conference, or to another event. Randi Ernst of FDR Designs said he sees the group moving toward a single annual event as the needs and style of the group conferences continues to evolve.

Kent passionately denounced the use of ASTM E 2190 for insulating glass unit testing.

Webb agreed with Kent and said that she wished there could be greater harmony in this respect between the U.S. and Canada.

With an IGMAC Certification Program update, Ken Rubis of Dow Corning said currently they are focusing on primary sealant adhesion to spacer.

The Component Task Group, led by Dave Cooper of Guardian Industries, is working on a document surrounding ISO certification and “screening the final document. “After a couple of web conferences we’ll review at the committee level,” said Cooper. When asked for a show of hands, four companies in the room said they were ISO certified.

The conference concludes today. Stay tuned to dwmmag.com™ for the latest updates.