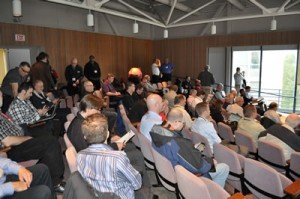 For the first day of the conference, attendees gathered at the Lawrence Berkeley National Laboratory for Emerging Technologies and Innovations committee meetings.

The 2014 Winter Meeting for the Insulating Glass Manufacturers Alliance (IGMA) officially kicked off today with committee meetings at the Lawrence Berkley National Laboratory. The conference is being held at the JW Marriott Union Square in San Francisco through Friday. 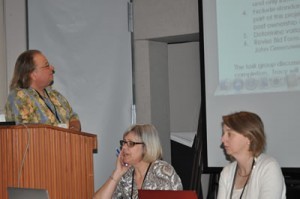 Today’s meeting focused on the Emerging Technologies and Innovations committee. To start the morning, the gas permeability task group opened with a discussion of EN1279-3. According to Randi Ernst of FDR Designs, who was filling in for John Greenzweig of HB Fuller Co., the task group is considering the feasibility of pursuing testing under this standard in North America.

Currently, the group is considering laboratories that would only require supplemental, testing-specific equipment to begin the process of introducing EN1279-3.

“Our next step will be to send a prequalification bid that will be done anonymously and only the IGMA office will have access to that information,” said Margaret Webb, IGMA executive director. “We’re trying to determine, is EN1279-3 the test method for us?”

The task group will revisit the issue and will have a decision on how to proceed with lab inquiries in April.

Another hot topic covered in the meeting was an update on the newer task group, vacuum insulating glazing. According to Dave Cooper of Guardian, the group is nearing completion of a final draft of its technical bulletin.

A Product Category Rules update was given by Helen Sanders of Sage Electrochromics. She told attendees that the committee is in the process of finalizing life cycle assessment, but that work has been delayed as a result of slow use phase results.

“We decided to look at the entire life cycle including the use phase. That’s where it has actually taken a long time because no one has done this before so we’re in new territory,” she said.

Funding is on hold until the completion of the use phase.

When questioned about the many considerations, including decay, the equations may not accurately represent, Jeff Haberer of Trulite Industries and developer behind the system, said, “There’s no known way to establish what the decay would be. It’s a quite difficult task to do this and we’re trying to make it as simple as possible … These are comparative numbers so one product compared to the next, you can at least get an idea of numbers.”

Additionally, no change over 30 years has been considered said Sanders. “This is really a comparison as opposed to being something absolute. This number is so much bigger than the cradle to gate number.”

Other groups that met today include MOCON and NREL Advanced Fenestration Testing. Gas-filled IGU Correlation Field Study will be discussed in a closed, members-only session Wednesday morning. Attendees also will tour the Lawrence Berkeley National Laboratory today. The conference continues through Friday. Stay tuned to dwmmag.com for the latest updates.