There’s no way to discuss the modern manufacture of building products and construction without hitting on the topic of sustainability. That point was not lost on attendees at the Insulating Glass Manufacturers Alliance (IGMA) 2015 Winter Conference in Fort Lauderdale, Fla., last week. 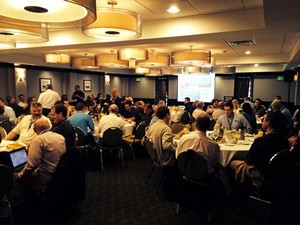 On Wednesday, Jim Mellentine of Sustainable Solutions Corporation presented “Health Product Declarations for the Insulating Glass Industry,” in which he discussed the nuances of the relatively new sustainability tool and how it fits into the industry.

Mellentine said he found four IGMA members in the HPD Collaborative database and pulled up two of their HPDs, anonymously, to show the kinds of common mistakes made when compiling the HPD.

Mellentine then gave a list of common materials in IGUs and showed an example of what a more accurate HPD would look like.

Later in the afternoon, Dr. Helen Sanders of SAGE Electrochromics touched on the PCR and LCA.

“LCA and eco-labeling are here to stay,” she said, noting that EPDs are in LEED v.4 and that big box stores, for example, are asking for EPDs. She said that while LCA is currently optional in the green codes, it could become mandatory in the next revision cycle. Additionally, many green building projects are requiring LCA anyway, and federal agencies and other progressive green codes are moving in that direction.

The recently established Window PCR also was discussed. In creating the PCR, the cradle-to-gate versus cradle-to-grave methods were a focus, so the group decided to divide the PCR into two. A cradle-to-grave-based PCR will be used for vertical windows only, and cradle-to-gate for skylights and windows.

The next steps in finalizing the PCR include completing “use phase” documentation for windows, as well as the modifications to cradle-to-gate fenestration sizes. The two PRC documents could then be created, and with them a website to store models and instructions. Sanders said it would cost approximately $12,000 to fund the process, with money coming from various industry associations.

On Thursday, attendees got a brief update on codes and standards. ASTM is currently updating its insulating glass standards for additional clarity, and the E2141 test method for electrochromics is also being reviewed.