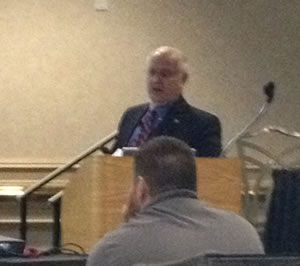 “Failure can include more things than seal failure, such as debris and a failed desiccated matrix,” said Lingnell, as the session got underway.

He then provided a session called “Introduction to Insulating Glass,” reviewing the history and terminology of IG as well as an explanation of what IG is. “The main point of insulating glass is to be an energy-saver,” he said.

Most notably, Lingnell briefly discussed the importance of gas filling and discussed the differences between argon and krypton. He mentioned that the heavier the gas, the lower the thermal conductance. “Krypton is about 2.89 times heavier [than argon], which gives you a better conductivity.” According to Lingnell, the use of the krypton also can help decrease the airspace needed between glass lites.

Afternoon seminars began with a lunch presentation of code updates by Tom Culp from Birchpoint Consulting. The afternoon continued with “Handling Coated Glass” by Jeff Haberer from Cardinal IG, “Dessiccants/Desiccated Matrix” by John Greenzweig from H.B. Fuller. The day will conclude with “Sealants” by Greenzweig and “Gas Filling” by Mike Burk from Edgetech IG.

Seminars for the day were expected to run from 8 a.m. until 5:30 p.m. Mountain Time.

Stay tuned to www.dwmmag.com for more updates from the event, along with GlassBuild America, which opens tomorrow in Las Vegas.