The Insulating Glass Manufacturers Alliance (IGMA) discussed the potential creation of a unified organization combining IGMA with the American Architectural Manufacturers Association (AAMA) during its summer conference. The board of directors of both organizations announced the discussions in June. 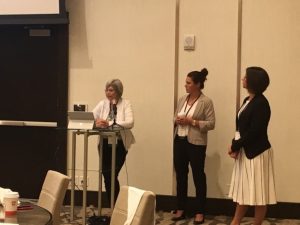 A combined organization would have a new name and both a Canadian and American focus. The AAMA, IGMA and IGMAC branding would remain on existing documents.

Currently, the joint exploratory team is considering dividing the organization into three product groups: architectural (APG), residential (RPG) and glass (GPG). The GPG would encompass existing IGMA committees. IGMA members would have the option to join only the GPG.

The board would include 13 members total under the proposed structure: four officers, three APG members, three RPG members, three GPG members and two at-large members. The exploratory team is considering maintaining AAMA’s three conferences a year rather than IGMA’s two conferences. One of those meetings would be in Canada.

Maintaining IGMA’s current level of involvement in Canada was a requirement for IGMA to consider negotiations.

“AAMA has encouraged this almost more than I have,” said IGMA executive director Margaret Webb.

Yglesias said that the access IGMA has to the Canadian market would be of great benefit to AAMA.

The joint IGMA/AAMA Summer Conference 2019 will be a trial run of the proposed unified organization. Members will be able to vote on the combination after the summer meeting next year. According to IGMA’s bylaws, only members in the manufacturer membership category can vote on this organization change. Manufacturers and suppliers in AAMA can vote on the issue.

IGMA’s staff would be retained. Webb plans to overlap with whoever fills her role for one year during the transition period and expects to retire in three years.

“It’s challenging for us to do everything. We need more staff to provide the products and services that everyone wants,” said Webb. “We want to do more, especially in the Canadian codes arena.”

Webb cited IGMA’s “excellent working relationship” with AAMA as a reason for choosing this organization. Another option would be to hire a management team to take over once she retires.

Jeff Haberer with Trulite Glass & Aluminum Solutions urged members to consider what this combination could mean.

“This isn’t a done deal. I want a lot of input from people,” he said.

One of the major concerns brought forth by members during the question and answer session was the end of IGMA’s autonomy under a unified organization. Yglesias assured members that AAMA works to give everyone a voice.

Both Webb and Yglesias asked for members to contact them with their concerns so that the exploratory team can create an effective strategy going forward.