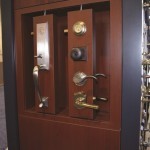 Kwikset’s door hardware and lock profiles come in a variety of contemporary looks. The company is also jumping on the home-automation trend in a big way. Its new Kevo Plus expands the company’s Bluetooth-enabled Kevo platform. It lets homeowners lock and unlock their doors with their smartphones. 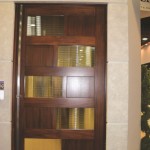 At the Kolbe booth, the company focused on its custom capabilities, for both doors and windows. “Whether it’s custom glass or hardware, our booth shows all the custom features we can provide,” says Lance Premeau, product and market manager. Attendees could view anything from its pivot door to a variety of custom colors available, large window openings, multi-slides in different profiles and more. 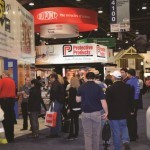 The IBS exhibit halls at the Las Vegas Convention Center were packed with attendees and exhibitors. More than 60,000 people made it to the big event, according to the National Association of Homebuilders (NAHB), which stages the trade show. That’s up from about 55,000 in 2015. 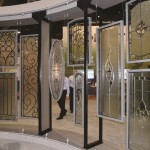 Masonite showed off lots of decorative glass panels in its big booth. It also expanded its Heritage Series with its Logan two-panel door. The interior molded door features a streamlined and clean Craftsman design to complement both traditional and modern home designs. 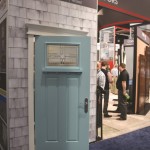 Therma-Tru was one of the companies that had a lot of modern looks on display. The door company showed off flat frames that its representatives say push that trend even more. “The vintage theme is also coming into that modern space as well,” said Heather Sonnenberg, vice president of strategic marketing at Therma-Tru. 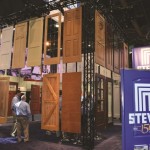 Steves & Sons showed off a wide selection of its interior and exterior doors made of steel, fiberglass or wood. 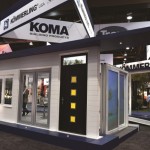 Kommerling’s booth featured a selection of its doors, both hinged and sliding. 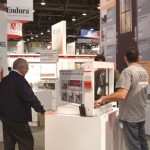 At the Endura booth, the company focused on identifying the costs of problems so customers can avoid costly service calls. To that end, the company launched the website Zacsaves.com for prehangers, builders and dealers. Additionally, the company’s Next Generation Z Articulating Cap Sill was named a 2016 Best of IBS winner in the windows and doors category. 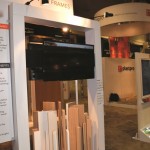 Plastpro celebrated its 21st anniversary at the show and introduced more than 20 new door styles, including a new Craftsman product. “We can cut anything on the door, any logo, explained Shirley Wang, president. She also reported the continued popularity of PlastPro’s polyfiber frames, which have seen sales grow by 30 percent. 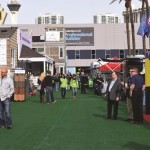 The IBS Show Village, in the parking lot at the Las Vegas Convention Center, featured five homes, including a one-story Ply Gem house with the company’s latest doors and windows. 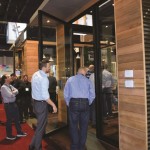 LaCantina Doors previewed a couple of new products that haven’t hit the market yet, like this pivot door system that features a sashless window. 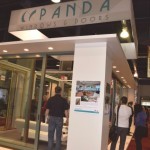 Panda Windows’ booth featured its popular FlexCounter, a window-wall combination that creates indoor-outdoor transitions in kitchens, bars and pass-through areas. Panda also announced it is gearing up for the launch of Panda Select, a line of thermally broken multi-slide doors in aluminum and wood that are aimed at the midrange market. 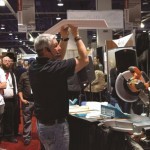 Live demonstrations are always popular at IBS including this one that shows an efficient way to cut moulding using Cut-n-Crown. 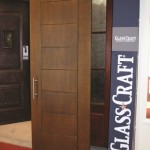 GlassCraft showed a new door that combines the benefits of steel and composite. The door is three times thicker than most steel, says president John Plummer, who adds that it is thermally broken, which is also unique. But what he says is truly different is that the door can be field trimmed, which was of great interest to those who stopped by. 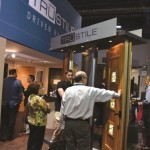