The International Builders’ Show (IBS) opened on Tuesday at the Orange County Convention Center in Orlando, Fla., and the mood could best be described as optimistic. 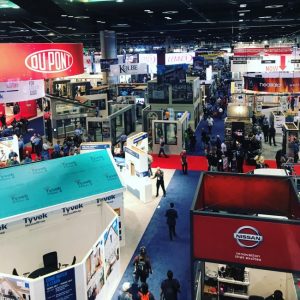 The International Builders’ Show is underway this week in Orlando, Fla.

“It’s been great so far,” said director of sales and marketing Michael Duncan of Viwinco, a first-time exhibitor. “We came down here last year to walk it, but this is our first time displaying down here, and it’s been pretty eye-opening and a  pretty cool experience. We’ve had quite a bit of traffic so far. Looking forward to the next couple of days.”

GPI was another company that reported a solid turnout on the show’s first day.

The National Association of Home Builders, which puts on IBS, said attendance was expected to be about 5 percent higher than the show in 2017, which drew about 80,000 people.

The show opened early Tuesday with a keynote address from NFL legend Terry Bradshaw, who gave an inspiring speech about sales strategies.

“God gave us a brain to figure out what our customers want,” Bradshaw said. “We can be creative and we can build, but what are we going to build if we don’t have anybody to build for? We’ve got to have customers.”

After Bradshaw’s address, the exhibition hall opened. Additionally, dozens of educational sessions in eight tracks covering topics ranging from sales and marketing to construction and codes.

Like many companies exhibiting at IBS Orlando, Viwinco’s booth emphasized its impact-rated products. Its big OceanView multi-slide door can be configured up to eight panels, and it can meet a structural wind speed rating of 171.2 mph.

Skylight specialists Velux had one of the more interesting products at the show — a solar-powered motorized residential skylight that doesn’t require electrical wiring.

“Basically, you can install this for the same cost as a fixed skylight,” said national product manager Ross Vandermark. “It’s completely self-contained, and it includes a 30 percent federal tax credit that includes product and installation cost.”

Plastpro introduced several new items to its flushed glazed line of fiberglass doors. Options included blinds between glass and SDL bars. The doors, which had previously been manufactured in Taiwan, will now be made in Ohio, said regional sales manager Sim Tweed. The company also introduced its first impact door with a full lite in it.

Unilux is a Germany-based manufacturer of high-performance doors, windows and wood-backed curtainwall systems. It showed off an impact-rated lift-and-slide door, a balcony swing door and a tilt-turn door. The company offers aluminum-clad wood windows that are available in 2,200 powder-coated color combinations.

“We can give you just about any color you want,” said Eric Murray, Unilux’s northeast regional manager.

Murray said the company has experienced solid growth since entering the U.S. market about nine years ago.

“We have dealers just about in all 50 states now,” said Murray. “They sell our product direct to the homeowner or the builder, however they want it to be handled.”