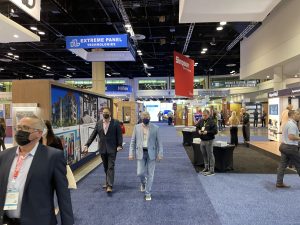 Even with fewer people at the event, manufacturers said they’re walking way with more leads than past years.

After sitting out a year due to COVID-19, that’s what Brian Whalen, vice president of sales for Hope’s Windows, had to say about the International Builders’ Show (IBS). Whalen said Orlando was the perfect venue for a comeback, where—in his opinion, at least—the state is “more open to business as usual” than other locations.

“Everyone’s done what they need to do to protect themselves, so at this point it’s time to get back to it,” said Lou Ann Schafer, senior corporate product manager for ODL Inc.

It was “touch and go,” Schafer said, when it came to deciding about whether or not to exhibit, but ultimately the move was imperative many decided. 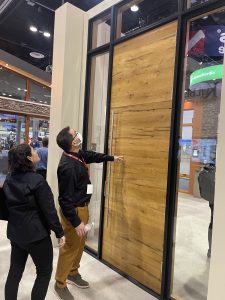 The trend for oversized doors continued at this year’s show.

Hope’s saw the show as a necessity for promoting products that are highly visual—steel and bronze doors and windows, with thin frames and sight lines. “We’re catering to the elite 1%,” he said. “The target includes folks making a 20,000-sq.-ft. home—the person who says, ‘That’s exactly what I want.’” But first you have to show builders and architects what’s possible, he suggested.

Others saw Orlando as fertile ground for impact windows.

“It’s nice to showcase here in Florida, where builders need those products,” said Liz Huber, creative and communications manager for Kolbe Windows and Doors. IBS has a way of turning builders into, “kids in a candy shop,” Huber said.

The show is far from its usual size this year, leaving parts of the Orange County Convention Center vacant. And in its opening hours, some exhibitors said they were a bit concerned, as attendees were slow to roll in. But by late morning the floor was filled with activity. The issue, it seemed, was a matter of logistics. After moving the drop-off zone for ride share services to an out-of-the-way location, some drivers had a difficult time navigating. That made for a slow start, said Eladio Rohden with Rhoden Doors. Once the show was up and running, in the opening hours things were a bit, “Different,” Huber said. These days, “You have to read the cues and body language,” she said, to determine how comfortable each attendee is with interacting. But trepidations faded over the course of the event. “We weren’t sure what the crowd would be like,” Huber said. But by the end of day one, “It was a lot better than I thought it would be,” added Lance McGrath, territory sales manager for GlassCraft. 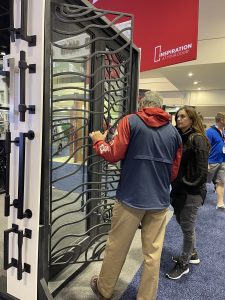 The show failed to draw the same lineup of door and window manufacturers as past years, but that came as an advantage for other companies. “In some ways it was great that a lot of other companies didn’t show up,” said Bill Sifflard, chief marketing officer for Quaker Windows and Doors. In its first year exhibiting, Quaker landed a spot near to a show lobby, next to a vacant spot, increasing the company’s visibility. All of the products on display in Quaker’s booth were relatively new—within the past three to four years, Sifflard said, making IBS the next best opportunity for promotion.

Despite tough operating conditions, most door and window companies said they’ve experienced record years amid COVID-19. McGrath said 2021 was the best in GlassCraft’s 45-year history. But with those successes have come changes, companies reported—some of which aren’t expected to fade with the pandemic. “The problem is, we’ve been in this for so long that some changes will be permanent,” said Tim Costello, CEO of Builder Homesite Inc., a digital solutions provider. In a presentation at World Vision’s annual awards breakfast, Costello told attendees that, in most cases. One trend that exploded in the early days of the pandemic includes e-commerce—including for doors and windows. 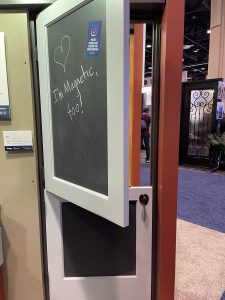 Dutch style doors have appeared amid the pandemic, now in interior spaces.

“It blew up fast,” said Jon Bellomo, a product specialist for US Door and More Inc., an online retailer. “For 10 years we were doing really well and then COVID-19 hit. Sales took off,” Bellomo said. “You couldn’t go out to stores.” As a result, builders that would normally send customers to show rooms began referring clients to online retailers, in some cases even providing them with product specifications and encouraging them to file their own orders. In this way, e-commerce experienced 10 years’ worth of growth in eight weeks, Costello said. Some industries saw as much as 1000% growth in 15 days, he added.

Digital tools aside, when it comes to trade shows, exhibitors agreed that there’s no replacing the real thing, and that realization may have added zeal to IBS’s comeback. Despite a smaller turnout, numerous companies told [DWM] they were on track for their best shows ever.