IBS Delivers with Products and Crowds 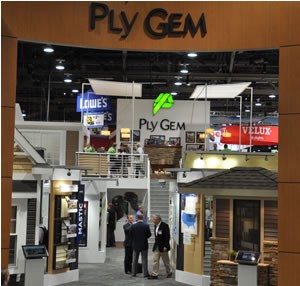 The International Builders’ Show (IBS) was packed with attendees and a palpable feeling of optimism and excitement. The show was held in Las Vegas last week and exhibitors had a variety of products on display.

Ply Gem expanded its booth from 6,000 square feet to 9,000—a feat that required a year of planning and ten semi-trucks to get all of the booth items to Las Vegas.

“This is a commitment by Ply Gem to this industry,” said John Stephenson, senior vice president of marketing. The company announced that it now has a moulding line, a category missing from its lineup, as well as new window options. The company also launched its ProTalk educational series which took place in its booth.

“Attendees always have the intention of attending seminars, but never make it off the show floor so we are bringing the educational sessions to our booth,” Stephenson said.

Regarding the addition of mouldings, president and CEO Gary Robinette addressed the press during the show and said, “We tried to buy the big guys since 2005-2006 but since that didn’t happen we decided to do it ourselves.”

The company has hired an innovation officer and also formed a new company, Foundation Labs with the goal of “moving building science forward.”

Products at the Kolbe booth proved that movable wall systems continue to gain in popularity. 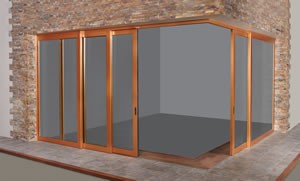 “The whole opening to outdoors trend is so big,” said Cindy Bremer, vice president of marketing at Kolbe and Kolbe. “It seems every product we have here fits that category.”

One of those products is Kolbe’s new TerraSpan 90-degree corner door unit. At more than 9 feet tall, the lift and slide door panels on the right side of the corner unit span 12 feet. The panels on the left side stretch more than 21 feet and pocket into the wall, practically disappearing to provide wide, open access to the outdoors.

When the door unit is closed, LoE3-366 glass keeps the interior comfortable. The glass is formulated to reject unwanted solar heat, allow natural daylight and maintain outside views, according to Bremer.

At Jeld-Wen, the company introduced a new wood window line.The W-2500 window will meet ENERGY STAR criteria in all four climate zones in the U.S. It even accomplishes this feat without a pricey upgrade to more expensive glass packages in the northern zone, says the company.

“The enticing new product launches from Therma-Tru in 2013 are in direct response to marketplace needs to meet consumer and builder demands,” said Mark Savan, president of Therma-Tru Doors and Simonton Windows. “There continues to be a desire in the market for trend-setting, innovative products which has influenced several of our product introductions for the year. Additionally, we’re seeing that ‘everything old is new again’ so we’ve embraced this idea with the launch of a sleek, modern line of doors with a vintage flair.”

The remote controlled solar powered skylight requires no wiring, which results in easy and cost-effective installation. The solar panel does not have to be exposed to direct sunlight as it works on cloudy days and with indirect light. There is an integrated rain sensor to close the skylight automatically in case of inclement weather.

Both the product and installation qualify for a 30 percent federal tax credit.

Diversified Lineal Systems, a fiberglass systems supplier, made its debut at IBS. The new company is a unit of Diversified Structural Composites. Mark Back, director of operations reported that the company will be rolling out several new products throughout 2013 concluding with a new product to be introduced in 2014 at IBS. “We will have a full line of products for the market,” said Back.

Avery Dennison isn’t a new company but it has a new focus. The company is marketing decorative film for the door to this market and reported a good response thus far from the industry.

At MFM Building Products, the company introduced Power Bond window tape which may be used in installations down to 25 degrees. “Usually, the temperature would need to be fifty degrees with other products,” reported Tony Reis, sales and marketing director.

“Our window tape sales were up dramatically in 2012 and we attribute that to Power Bond,” added David Delcoma, product marketing manager. “We can go into markets we couldn’t before [including Canada].”

For some, IBS is an opportunity to answer the most often asked questions from the industry. Josh Snyder at Hornschuch reported that the company was eager to show it’s weathering samples to attendees. “We always get questions regarding weathering so this year we showed real world weathering samples up to five years.”

“They were impressed,” added Snyder. “They are more at ease now to try exterior grade films. That’s the next step for this market.”

Meshtec, whose screen systems are designed for security, introduced a new screen with safety in mind. Len Morrison said the company’s new screen is in response to the concern regarding child window falls. The prototype was unveiled to gain feedback from attendees. Morrison added that the screen can be used with most window types and is ideal for public buildings.

At Schlage, the company added some functions to its Nexia Home Intelligence System unveiled last year. The homeowner can now get a text if, for example, a window is opened.

“Three of the top homebuilders took this as a standard option for their homes,” said Schlage’s Ann Matheis, brand director. “We are seeing home automation come mainstream.”

Show organizers announced some exciting news for the 2014 IBS show. The event will co-locate with the Kitchen & Bath Industry Show (KBIS). The two events will remain separate and distinct shows held simultaneously at the Las Vegas Convention Center through 2016, creating Design and Construction Week.

“Two shows, two associations and one place to see and connect with every aspect of residential construction and remodeling,” said John Morgan, National Kitchen and Bath Association president. “We couldn’t be more excited to deliver this special event for the industry.”

The event will be held Feb. 4-6, 2014 in Las Vegas, with each show occupying a separate hall. Design and Construction Week 2014 is expected to draw more than 75,000 specifiers, builders, dealers and suppliers and 2,000 exhibiting brands, based on recent trends for both shows.

In 2015, Design and Construction Week will expand further with the addition of SURFACES and StonExpo/Marmomacc Americas, Jan. 21-23 at the Mandalay Bay Convention Center in Las Vegas. SURFACES is sponsored by the World Floor Covering Association. Shuttle buses will run between the convention centers to allow approximately 25,000 additional attendees to tour all three exhibits.