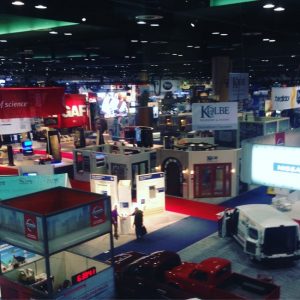 The International Builders’ Show (IBS) continued on Wednesday at the Orange County Convention Center in Orlando, with lots of signs of optimism for the new year. There were plenty of industry companies who didn’t exhibit, but were still there to network and see what’s new.

“The IBS show is going very well,” said Jonathan Chauvette of Canadian machinery maker Groupe Eugenie, which was not exhibiting at IBS. “It looks very crowded. We see big smiles on everybody’s faces.”

“We saw a lot of people in here, so that’s really promising for 2017,” said Filip Geeraert, president and CEO of Deceuninck North America. His company also wasn’t exhibiting at the show.

Nick’s Building Supply was one company with some large products. The wooden door specialists displayed an entrance system with operable side lites to allow homeowners to move large items such as furniture inside. The company also showed off a selection of copper doors.

Sliding-door maker Panda rolled out the new Panda Select collection, which is a line of thermally broken multi-slide doors in aluminum and wood that will be aimed at the midrange market. The company’s booth also featured automation options for its products.

Unilux, which is based in Germany, showed off a European-influenced aluminum-clad wood tilt-and-turn window. It comes in five different wood species, and it’s available in more than 2,000 colors.

Intigral was a new exhibitor at IBS. The company’s Innovia blinds-between-glass products for insulating glass units generated a lot of interest at the show.

Stay tuned to dwmmag.com for continuing coverage from IBS Orlando.