IBS Closes Out with Jump in Attendance

The 2018 International Builders’ Show (IBS) wrapped up a three-day run in Orlando, Fla., on Thursday with one of its largest turnouts in recent years, according to the National Association of Home Builders (NAHB), which stages the event. 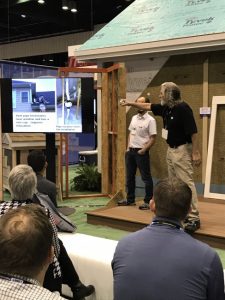 Educational sessions were a major part of IBS Orlando.

Exhibit space for IBS also grew from 569,000 square feet in 2017 to 583,000 square feet this year. More than 1,500 exhibitors displayed the latest in building products and technology.

“The show is back and we were extremely busy all week,” said Vicki Frye, director of corporate marketing for Ply Gem. “People are eager to know what’s new, so we had a lot of fun showing them a wide variety of real products for real projects, from entry-level and do-it-yourself, to higher price point homes.”

Ply Gem’s booth also drew a big crowd on the show’s opening day for a concert featuring up-and-coming country music star Brett Young. He serves as a regional ambassador for the company’s Home for Good project, which has helped build around 450 homes for Habitat for Humanity in more than 70 communities across the U.S.

In addition to meeting suppliers and seeing product demos throughout the three-day show, attendees could take part in any of more than 140 education sessions led by industry experts on a wide range of topics.

“After attending just two [education] sessions, I already found exactly what I came for,” said Walt Schumm, a custom home builder and president of C.D., LLC in Crestwood, Ky. “I’ve made several new connections with whom I think we’ll strike up business relationships. Plus, it’s really interesting to see a huge presence from Asian and European vendors on the show floor. The products they’ve got on display are just unbelievable.”

Doors and Windows on Display

Fenestration products are always a major component of IBS, and DWM saw several more on the show’s final day.

“The show’s been really good,” said Dave Delcoma of MFM Building Products. “Traffic’s been heavy even today on the last day. There’s a lot of good positive feedback.”

Woodgrain Doors showed off its capabilities with fiberglass at the show. The company captures all the details and nuances of a wood grain door and turns it into a fiberglass skin, and Steves Doors had new direct-glazed and flush-glazed doors on display in its booth.

Solar Innovations rolled out a new extra-narrow marine-glazed folding glass wall. It comes with a new lockbox. The company’s booth also featured examples of its residential and commercial products, including folding, sliding, and stacking walls, doors, windows and screens.

Sky-Frame debuted a sliding window and door system at IBS that’s rated for hurricane impact. The system has undergone final tests for hurricane-level water and air pressure tightness. The company will also present a large motorized corner module, which was fitted with an electric drive and an integrated invisible Fly insect screen. The frameless, pleated screen fully retracts out of sight into the frame when not in use.

FlexScreen, which has been grabbing a lot of attention in the industry for its innovative flexible window screens, announced that the company will soon be opening a fourth plant in Atlanta.

Altieri said he invented FlexScreen in his garage after facing years of problems  with similar products during his time as a window screen salesman. Today, FlexScreen is partnering with several major manufacturers, including Soft-Lite and the Earthwise Group.

Phantom Screens released a new retractable wall screen for oversized door systems and large openings at IBS. It covers doorways and openings up to 24 feet wide and 10 feet high and disappears out of sight when not in use. The wall screen features a thumb latch integrated into the handle for controlled openings and mesh that is completely secured into track to prevent unwanted pests.

Wizard Industries introduced its new VistaView Horizon. It’s a screen that can span up to 40 feet in width and 10 feet in height, which could work well with large sliding doors. According to the company, it’s the largest retractable wall screen available on the market.

Lincoln Windows celebrated its 28th consecutive Builders’ Show with a lot of new products in its booth. Sales manager Todd Metz highlighted the black interiors on its windows, and he said other colors are growing in use in the industry.

“Gray is getting pretty popular with exterior colors,” he said.

Hornschuch, which is now part of the Continental group, brought its skai jet black laminate with cool color “Plus” technology to the show. According to the company, it reduces heat build-up significantly compared to other surface finishes, and it can be used for a multitude of applications including laminating windows and doors.

Endura Products’ booth resembled a workshop, which is fitting. The company rolled out new door frame and threshold solutions under the Door of the Future banner that are designed to save time and labor costs during home construction.

On Thursday, the Best of IBS Awards were given out, and the Velux Active skylight was the winner in the Window & Door Product category. The finalists in that category were Kwikset’s Kevo Convert conversion kit; the MagLev Glide sliding door system; two products from NanaWall — ClimaCLEAR and NanaWall Shades; and Printing Glass by Printing Enterprise Limited.