IBS 2019: Everyday Doors and Windows Fought for the Spotlight 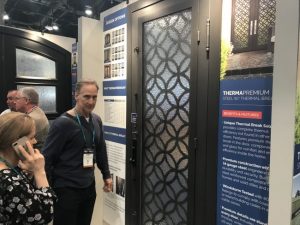 Standard window and entry door products may have been dwarfed in size by oversized sliders and pivot doors at this year’s International Builders’ Show, but in the end they found ways to compete. Thermally-broken steel doors sported new, eye-catching designs and finishes, and yesterday’s fiberglass doors glowed with newer, brighter colors. Meanwhile, Andersen’s A-Series and 400 Series windows looked down on even the biggest products, by stacking into a tower that stood 22 feet. Thanks to a new design feature, the windows in that display could be assembled by just one laborer.

As some dealers tell DWM’s editors that they have more jobs on the books than they do laborers to install windows, Andersen debuted a new option for its products that company officials say cuts the number of necessary installers in half. Debuted at this year’s show, a new Easy Connect Joining System for A-Series and 400 Series windows allows individual windows to be interlocked into multi-window units—all by a single laborer. Meanwhile, Andersen’s public relations specialist, Aliki Vrohidis, said eventually the feature will be available on all of its windows—even allowing for various models and series to be locked together.

By installing and fastening one, left hand unit into window openings, it’s possible for a single installer to add and interlock additional units by conjoining them through interlocking fiberglass plates. So far as how Andersen came up with its estimate of 50 percent fewer installers, Vrohidis said that info came from contractors who’ve tested the system. It’s also a number that makes sense, considering the fact that a single installer can carry most individual window units, while even the smallest units with multiple windows require at least two.

Andersen wasn’t the only company offering products designed to cut down on laborer requirements. Matt Bradshaw, territory sales manager for Jeld-Wen said his company introduced a pocket-style version of its Siteline windows, which also include numerous snap-on pieces to make installation quicker and easier. Chris Benware, one of the company’s public relations representatives, also said that Jeld-Wen is moving away from primed and painted finishes for its vinyl windows, from here out turning to a film product known as Finishield. That, he said, will not only cut out the necessity for painting, but also reduces turn-times on orders.

“We’ve been talking to a lot of installers about steel doors, which aren’t always the easiest to install,” said Jacqueline Chan, GlassCraft’s director of marketing. “From that we came up with a number of features,” she added, like adjustable, barrel-style hinges and metal mounting clips with adjustable screws.

But it wasn’t those features that drew attendees into GlassCraft’s booth to see its latest steel doors—many of whom had a difficult time accepting that they were looking at steel; it was actually the products’ looks.

“So this is a steel door?” asked Valley Tucker, with Stoneridge Homes in Huntsville, Ala. “Wow. This is nice looking.”

“I’m just blown away by the creativity,” said Bobby Biebl, an interior painter. “I just love them.” 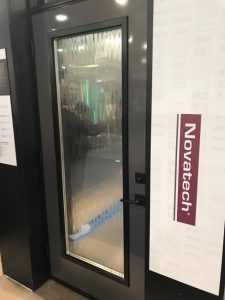 GlassCraft and Novatech both say they’re sticking to steel, while looking to make a comeback for the material, by debuting thermally-broken designs to aid performance. “Fenestration standards have tightened and the entry door market has so far failed to respond,” said Robert Latner, vice president of sales for Novatech.

Novatech’s latest steel door, NHP, flaunted a thick, hot-dipped, fleck-style paint at this year’s show, which proved to be a magnet for attendees, Latner said. But the more impressive features might be the 30 percent increase in insulation it offers over prior models, along with PG 90 structural and PG 75 water ratings.

Plastpro found a way to draw attention to its doors that was hard to overlook, even at a distance. While its fiberglass, shaker-style doors aren’t new, they sported a wide variety of extremely bright paint finishes—some of which were practically neon. Those colors were far from an arbitrary attempt at grabbing attention, though, said Vanessa Lin, one of the company’s marketing coordinators. Instead, they represent the latest trends among interior paint colors and are designed to line up with companies like Benjamin Moore.

Overall, the show seemed to back claims by officials that attendance was at its highest in a decade. In its 75th year, it drew a whopping 67,000 professionals, they said. Exhibit space also expanded from 583,000 square feet in 2018 to more than 608,000. All of the exhibitors visited by DWM’s editors said they noticed a significant increase in both traffic and the quality of visitors. Traffic in Jeld-Wen’s booth was 30 percent higher than previous years, said Benware.

Next year, the event will return to Las Vegas, January 21-23, when this year’s numbers will be hard to beat. One thing that outdoor exhibitors might hope to see less of after this year’s show includes snow in the forecast.