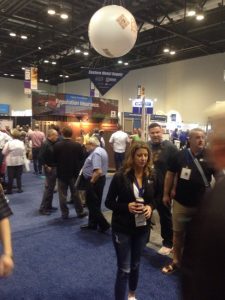 Large crowds were evident during IBS 2017 in Orlando, Fla.

The International Builders’ Show (IBS) wrapped up a three-day run in Orlando, Fla., this week, and one of the highlights was the debut of a major rebranding effort from an industry leader.

Masonite introduced a new logo and visual identity at its large IBS booth. The company also announced the formation of a Trend Council with a mission to provide customers with insights on popular and emerging design trends.

“The launch of our new brand embodies the spirit of our personality and represents the transformation of our company,” said Fred Lynch, president and CEO of Masonite. “It depicts the ongoing partnership between Masonite and our customers to continually create a better experience.”

The new Masonite logo is a stylized “M” symbol that incorporates intersecting doors.

The company’s new Studio collection of interior and exterior doors features five contemporary designs that were crafted to create a unified look both inside and out. According to the company, it’s the only product line on the market today that does that.

“Jeld-Wen is in a unique position to bring together all entry points of a home to make a style statement,” said Jim Parello, the company’s vice president of marketing. “We think this solution will be especially appreciated by multifamily builders and architects.”

Jeld-Wen also rolled out a new line of exterior steel doors, the Craftsman Collection. The company says the products feature modern designs that are affordable and secure.
Additionally, the company announced that all of its Premium vinyl windows, including the new tilt products, are now available with glass approved for both wind zone 2 and wind zone 3 protection.

Phantom Screens has developed a new motorized retractable wall screen that covers 40-foot wide openings and beyond. The company says it’s the first of its kind in the industry. Until now, motorized screens could only cover a maximum of 25 feet. Thanks to special technology introduced by Phantom team, they can now provide motorized wall screens to cover larger openings without any bowing in the roller or sagging in the mesh. It’s scheduled to hit the market in September 2017.

Another screen company, Wizard, was a first-time exhibitor at IBS. The company showed off its VistaView extra-large retractable screen, and it also offered a sneak peek at its newest innovation, a slim profile motorized retractable screen.

On Thursday, the Best of IBS Awards were handed out, and Andersen’s new multi-glide door was the overall winner in the windows and doors category. Other nominees included Andersen’s VeriLock wireless security sensors, Jeld-Wen’s Studio Collection of doors, the VistaLux collection by Kolbe, and PrivaSEE by Nana Wall Systems. Additionally, the Brinks Home Security Array smart lock won the Best of IBS Award for indoor living product.

ODL’s tubular skylight was a finalist in the category of best energy-efficient product.

The National Association of Home Builders (NAHB), which puts on IBS, said about 80,000 home builders, remodelers, developers, designers and their trade partners attended the show, up from 60,000 last year in Las Vegas.

“The home building industry turned out in force for this event,” said Geoff Cassidy, NAHB senior vice president of exhibitions and meetings. “The exhibits were tremendous, and as our already-strong education program continues to expand, we saw many more builders take advantage of some great sessions.”

The International Builders’ Show will return to Orlando January 9-11, 2018.