How Will Same-Sex Marriage Affect Business?

It’s an argument that was often used by proponents of legalizing homosexual marriage: “If same-sex marriage is legalized, it won’t affect you at all.”

But is that true? What does the sweeping Supreme Court decision that legalized same-sex marriage nationwide really mean for the industry? 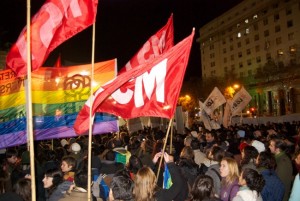 A crowd in support of gay marriage. Via: Wikimedia Commons

Some of the nation’s top voices in business have remained silent. The U.S. Chamber of Commerce has yet to issue a statement, and the Window and Door Manufacturers Association declined to comment.

How It Will Affect Companies

Janice Cowhey, a partner at Marcum, an accounting firm, told The Street that the ruling will affect some people—specifically those who work in human resources.

“There are a lot of issues when it comes to benefits. [You have to make] sure your employer knows you have a spouse and giving them your marriage certificate so they withhold your taxes correctly,” she said.

Cowhey explained that the changes will be implemented quickly in terms of the states’ compliance, but for businesses, it may take some time to adjust paperwork and computer systems.

One door and window dealer told DWM that while the ruling was “historic,” he’s still processing what it really means for his business.

How It May Affect Employees

Those who celebrated the ruling as a victory for themselves, however, may need to brace for unintended consequences—especially if they don’t have plans to get married soon.

What’s your take on the topic? Take our poll, halfway down on DWM’s homepage, which asks if the ruling will impact your business and leave a comment below.