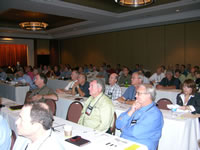 “If you’re in this room you get a gold star because that means you’ve survived [the housing downturn and recession].” Those were the words of Eric S. Belsky from Harvard University’s Joint Center for Housing Studies, as he addressed members of the Association of Millwork Distributors yesterday during their annual convention taking place this week in Charlotte, N.C. He then recapped for attendees the dismal state of the housing market and offered some glimpses into its future.

“The housing market is in various shades of lousy,” he said. “We expected a fallout after the first-time homebuyers credit expired but we didn’t expect this much [of a drop].”

Belsky addressed many reasons for the housing market collapse, while signifying that attendees are already aware of these factors, but still took the time to point out a variety of statistics.

“We’ve had an enormous inventory correction,” he said. “You know this but I want to remind you how dramatic his has been.”

“So you have this massive problem trying to work itself out,” he said. “You have a lot of distressed sales and until those are gone we have a real problem.”

Belsky said the situation “really starts to get depressing” when you start to look at new home sales.

“You’re basically in hell when it comes to new home sales,” he said.

Future Outlook
Regarding when the housing market will turn around, Belsky said there are several $64,000 questions that need to be answered. For example, he said the job market is particularly challenging for young and minority workers and “these are the individuals that we need to drive home sales,” he said.

He added that immigration has become an increasingly important driver of household growth. “The big wildcard is immigration,” said Belsky.

While on the surface the situation looks bleak, he said that looking back to past housing downturns, there is reason for optimism.

“There is reason to believe we are headed out of this based on inventory when looking back historically,” he said

More reason for optimism is the fact that the number of young households is expected to set a record by 2015. “The Echo Boom will be even larger than the Baby Boom,” he said.

How to Sell Strategically During an Economic Recovery
While attendees of AMD’s annual convention heard some dismal housing news, they also learned that even in a downturn there are real ways to sell strategically and gain market share during a downturn. That was the message from Dr. Rick Johnson who gave a motivational seminar highlighting real ways companies can compete in tough conditions.

“It’s easier to gain market share during a down economy,” he said. But he added that, “It’s not okay to just do your job during a recovery,” he told attendees. “You wouldn’t be here if you had just been doing your job in the past few years.”

A key to success, said Johnson, is employing a key team.

“If you have average employees, you aren’t a good businessperson,” he said.

He admitted that while there are major challenges the industry is facing, “your competitors have the same problems.”

“You have to be better and you have to have above-average people,” he said.

While his presentation focused on sales, he insisted that sales are not just up to the “salespeople.” “Everybody sells,” he said.

And when it comes to selling, Johnson said, “you must become a total solutions provider.”

Find the customer’s pain and find the solution to take it away,” he said.