Housing Industry “Gets Back to Normal” 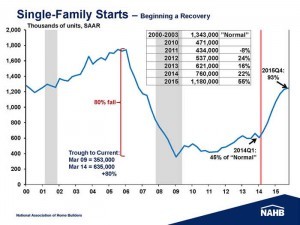 In the years following the bust, economic forecasters often used the term, the “long road back to normal” or the “new normal.”

In today’s National Association of Homebuilders (NAHB) Spring Construction Forecast Robert Denk, NAHB assistant vice president for forecasting and analysis, discussed “getting back to normal” and painted a picture of this road past, present and future.

Then came April 2010 when the new homebuyer tax credit expired and progress fell off. 2010 and 2011 were spent bouncing along the bottom, he said.

“Our aggressive forecast is on the single family new side which means we need to build them,” added NAHB chief economist David Crowe. “So we will have a 22 percent increase this year from last year and much stronger growth next year as we wipe out all these hurdles and difficulties and satisfy pent up demand.”

Crowe outlined some of those hurdles and concerns as outlined by NAHB builders who listed their top concerns as lot supply, labor and credit. The NAHB also asked builders about homebuyer concerns.

“Interestingly these answers were not housing related,” said Crowe. “The top reason is the buyers are worried about their own individual circumstances. They also worry they can’t sell their existing home.”

Good news includes the fact that consumer confidence is improving as are home prices.

“We are back to 2005 levels and we expect that to continue to increase,” said Crowe. “One of the primary reasons has been affordability and inventory.” 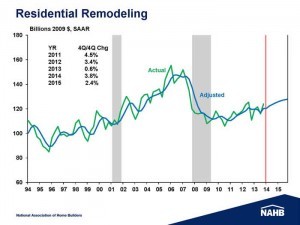 He added that remodeling has also posted a solid increase. “We lost the energy tax credit which takes a little wind out of it,” he said. “But we are nearly back to a normal level and settling back to a more long term growth path.”

Maury Harris, UBS chief economist, outlined the good news in the economy including the fact that gross domestic product is up 3 percent this year and projected to be up 3.2 percent next year.

“The first quarter was off to a weak start but we are on the road to making that up,” said Harris. “Wealth is going up, and banks have been easing lending standards.  This will lead to more job growth this year.”

He did point out that household formation has been unusually low in the last few years–2.5 million households short, to be exact.

One of the main reasons for this is unemployment in the 25-34 age group which has had a high incidence of “doubling up” when it comes to their living space.

“As the unemployment rate comes down people will feel better [and start buying] but this doesn’t happen overnight,” said Harris. “We will see shared household data starts come down also.”