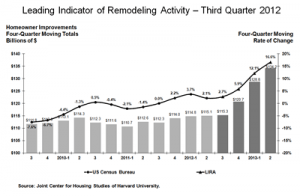 An improving housing market and record low interest rates are driving projections of strong gains in home improvement activity through the end of the year and into the first half of 2013, according to the Leading Indicator of Remodeling Activity (LIRA) released by the Remodeling Futures Program at the Joint Center for Housing Studies of Harvard University. The LIRA predicts that annual homeowner improvement spending is expected to reach double-digit growth in the first half of 2013.

“After a bump in home improvement activity during the mild winter, there was a bit of a pause this summer,” says Eric S. Belsky, managing director of the Joint Center. “However, the LIRA is projecting an acceleration in market activity beginning this quarter, and strengthening as we move into the new year.”

“Strong growth in sales of existing homes and housing starts, coupled with historically low financing costs, have typically been associated with an upturn in home remodeling activity some months later,” says Kermit Baker, director of the Remodeling Futures Program at the Joint Center. “While the housing market has faced some unique challenges in recent years, this combination is expected to produce a favorable outlook for home improvement spending over the coming months.”

The LIRA is designed to estimate national homeowner spending on improvements for the current quarter and subsequent three quarters. The indicator, measured as an annual rate-of-change of its components, provides a short-term outlook of homeowner remodeling activity and is intended to help identify future turning points in the business cycle of the home improvement industry.