The Asunción Valdivia Heat Illness and Fatality Prevention Act is working its way through the legislative process. Introduced by Rep. Judy Chu of California in late March 2021, the bill requires the U.S. Department of Labor to instate an enforceable federal safety standard with respect to exposure to excessive heat. 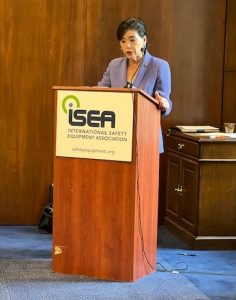 “Excessive heat,” according to the bill’s text, includes outdoor or indoor exposure to heat at levels that “exceed the capacities of the body to maintain normal body functions and may cause heat-related injury, illness or fatality.” The bill also sets requirements for training and education aimed at preventing and responding to heat illness, as well as whistle-blower protections.

On July 19, the International Safety Equipment Association along with legislators, PPE manufacturers, safety experts and more met in Washington, D.C., to advocate for the bill. The event included a briefing on heat safety Personal Protective Equipment (PPE) from Magid, a manufacturer of PPE products.

“Climate change has greatly increased risks for workers in non-climate-controlled conditions. In fact, June 2021 was the hottest June ever recorded in the U.S., and July 2021 was the hottest month ever recorded on Earth,” Chu says. “The National Oceanic and Atmospheric Administration says there’s a greater than 99 percent chance that 2022 will be among the ten hottest years on record. The numbers are astonishing and it’s so clear that we have to do more.”

Heat illness lands more than 70,000 people in the emergency room each year, according to the Bureau of Labor Statistics. The Asunción Valdivia Heat Illness and Fatality Prevention Act would see the Occupational Safety and Health Administration (OSHA) establish an enforceable federal standard to protect workers, and ideally reduce the number of emergency-room visits.

Dr. Maggie Morrissey, director of Occupational Safety at the Korey Stringer Institute and president of the Heat Safety & Performance Coalition (HSPC), attended the event on behalf of Magid. The company is a founding partner of HSPC.

“I hope this experience helped educate staff members and make them feel encouraged to pass legislation to protect American workers from heat stress. Workers can’t continue to work in the heat without federal protections,” says Morrissey in a Magid news release. “Cooling PPE should be used along with other heat stress prevention strategies–not as a last resort in a heat safety plan.”

The bill was assigned to the House Committee on Education and Labor and is being amended following a committee vote in late July. As of August 2, no amendments had been submitted.