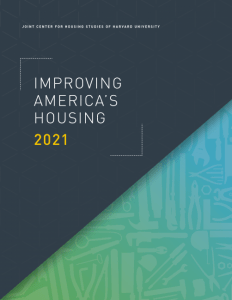 While the U.S. economy shrank by 3.5% in 2020, spending on home improvements and repairs grew more than 3%, to nearly $420 billion, as households modified living spaces in response to COVID-19. This is according to Improving America’s Housing 2021, a new report released last week by the Harvard Joint Center for Housing Studies.

“From 2010 to 2019, homeowners largely relied on professional contractors, and remodeling activity was heavily concentrated in coastal metros,” said Kermit Baker, director of the Remodeling Futures Program at the Joint Center for Housing Studies. “But in 2020, amid concerns about having contractors in the home, [do-it-yourself (DIY)] projects gained new popularity, and remodeling activity shifted to lower-cost metros where larger shares of younger households—traditionally the most active do-it-yourselfers—could afford to own homes.”

The numbers are striking. In late March of last year, 60% of respondents to one homeowner survey had begun at least one DIY maintenance or improvement project in the previous two to three weeks; by early May, the share had jumped to nearly 80%, according to the report.

The increasing incidence and severity of climate-related disasters caused spending on disaster repairs to climb to 10% of homeowner improvement expenditures by 2019, double its historical share and setting a new high of $26 billion.
“In the short term, many homeowners who deferred projects—both large and small—in 2020 are expected to complete those renovations once the pandemic is over,” said Baker. “Additionally, there has been an upturn in homeownership as younger households look to purchase homes, the number of multigenerational households has been growing, and remote work has given people more locational flexibility and the desire to modify their homes.”

That ability for many to work anywhere is definitely contributing to growth.

“The research I have seen pre pandemic was that 10% of employees worked from home,” said Baker. “Even conservative estimates say that will double. What does that mean for home improvement? It means you can live anywhere. This mobility has led to increasing home ownership rates.”

One attendee asked how homeowners are paying for these remodeling projects.

“Traditionally, by a wide margin its cash [two thirds is from savings and cash],” said Baker. “Historically that has been a huge impediment to industry growth. What would housing or automotive look like if you relied on that?” he asked. “This reliance on cash in the near term will be less of an impediment. What will slow it down is labor and supply and that’s a different problem.”