Guest Blog: Hitting the Root of the Trend in a European Door and Window Tech Tour

Upon completing a group visit of one highly automated door production facility during my door and window benchmarking tour of Germany and Switzerland last week, our tour host, Doug Maat, laughed, “My first adjective is ‘wow.’”

I’m going to stick with that as my overall impression of the week-long tour, hosted by machinery distributor Stiles Machinery Inc. in conjunction with CNC manufacturer Homag Group. 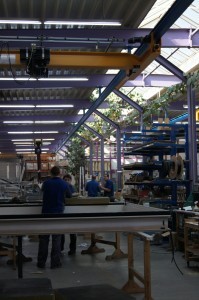 Many of the shops featured on this technical tour married top-notch automation with carefully detailed hand craftsmanship.

Stiles has been hosting technical tours with all manner of themes for about 40 years now, and clearly they know a thing or two about what they’re doing. I was among a group of about 14 primarily North America-based door and/or window manufacturers that participated in the tour of five door and window fabrication plants that, as the tour description said, “have embraced manufacturing processes to expand their capabilities, reduce waste and improve product quality.” What made the tour so very interesting, however, is that it wasn’t simply a tour of the latest and greatest machinery Stiles can supply, as Maat (who, when not acting as official tour guide, works as product manager for the Stiles edge processing group) was quick to point out. Rather, it showed a cross-section from completely automated lines to old world hand-craftsmanship, a mix of standard door after standard door produced in an automated dance to highly custom and beautifully detailed wood-metal-glass creations. On top of that, the tour spent a day at fensterbau, the growing trade show for the fenestration industry, which allowed group members to explore even more options for how to automate their own processes back home. And on top of that, as we toured a variety of cities and small towns, we were able to soak up impressions of Germany and Switzerland that gave us a sense of why certain things are done in each of these shops. 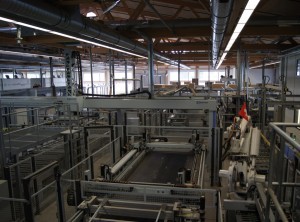 Long-term planning takes on a new meaning when focusing on the company takeover by a sixth generation, rather than fourth quarter results. In that sense, a fully automated investment may make more sense.

Allow me to explain that last point. It took just a ride from the Stuttgart airport to our first hotel near the picturesque cobblestones of the Königstrasse in a tiny diesel taxi to open a discussion of how Germans are now paying roughly $8 a gallon for gas. And as we sat on the bus watching the Alps or the Danube River roll by, there was often the shimmering of light on a half dozen homes’ PV panels. Those kinds of things would lead to a discussion on the bus or over a delicious dinner about the stringency of the energy codes in Germany. So upon making it to, say, the Huber Fenster window plant in Herisau, Switzerland, it made sense that their custom windows would be primarily triple-glazed, or that having a passive house certified window would help Nestle Fenster in Waldachtal, Germany, draw in prospective customers as effectively as any active sales force. It seemed obvious that the Schindler façade plant in Roding, Germany, and the Riwag Turen AG door plant in Arth, Switzerland, would both be at least in some part solar powered. And time and again we were told that wood wasted in the processing of doors and windows was never wasted as it was inevitably pelletized and used to heat the facility (which also made sense in the context that nothing in Germany seems to be wasted; several members of our group joked about the intimidation of finding the “right” recycling bin out of the group of five that seemed to be on every strasse, er, street corner). 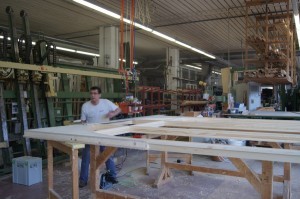 Many of the shops visited on the tour focused on providing quality products locally, and decades of success within that niche seemed to speak louder than an active sales force.

Then as our group left the hotel in Konstanz, Germany, and I ducked around the corner to see the farmers market being set up in the square, I couldn’t help but see it as yet another example of buying local, since we’d had so many discussions on that point in the production shops. The 400-year-old Nestle Fenster had no need to expand beyond 40 employees (or employ salespeople) as its niche was providing high quality windows locally.

Riding the bus and having one of our group draw our attention to a castle on the horizon also was a sharp reminder that history is quite a bit more present in Germany than it is in the United States, to say the very least. Many of the shops we visited were third or fourth generation run, with the fifth generation picking up the ropes. As our group discussed, long-range planning takes on an entirely different meaning when you’re planning for your grandchildren to inherit your 129-year-old company versus planning for your fourth quarter gains. In that context, when making a huge investment in an automated line, immediate return may not be your biggest concern. 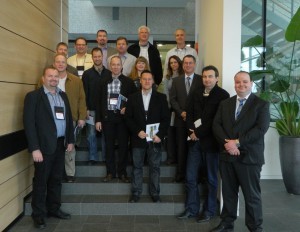 Stiles' technical tour of plants in Germany and Switzerland provided a unique look into European trends, while the group context provided context for adopting those practices back home.

Of course one of the most enlightening parts of the group tour was the group itself. Our host was great about doing a recap after each plant as we got underway to the next stop of our journey. People could share what struck them as unique, impressive, strange, confusing, etc., about each plant, and then revisit those conversations over a drink later that night. Personally, listening to the comments and thoughts shared by our group of door and window manufacturers from a variety of market segments was for me a tremendous learning experience that provided unique insight into production back home as well as in Europe.

So on that note, I’d like to send a big thanks to the entire group for letting me pick their brains, and to our hosts for the eye-opening experience. And for you, dear reader, please look for the May issue of DWM Magazine for the full story on the plants visited during this trip.