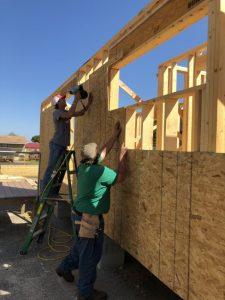 Students work on a single bedroom home through the Casa Über Alles program. Photo provided by Laughlin Home and Restoration.

As a shortage of skilled labor reinforces the need for early development through career and technical education, a Texas-based grassroots program is adding its contributions.

Richard Laughlin, president and owner of Laughlin Home and Restoration, started Casa Über Alles, a program that aims to help worker deficits—including in door and window manufacturing and installation. The name is a “hodgepodge” of German and Spanish, representing the unique diversity and heritage found among program participants and the community, explains Laughlin.

Based in Fredericksburg, Texas, the program offers high school students the option for using part of class time to build 650-square-foot single-bedroom homes “from the ground up” on the school campus.

“We’re all custom builders and trade partners so it’s built to a custom level,” Laughlin says, “with wood windows, custom cabinets, granite countertops—basically the full-meal-deal for a custom home.”

Laughlin and the team began the program as a way to restore pride back to the trades, he says, after the high school program that started him on his path to homebuilding was cut nearly 20 years prior.

“There was a big push for everyone to go to college and I think that led to a whole generation missing out on the trades,” Laughlin says. “Now we are seeing this deficit in skilled labor and everyone is trying to figure out what to do.” 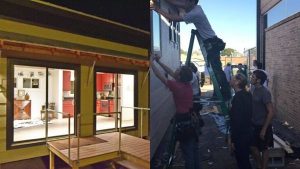 The fully self-funded program is now in its fourth year and provides students with opportunities to learn important skills at a professional level for homebuilding-related jobs.

“We have seen such great support for this program. All the builders that help are competitors in their daily work lives, but they’ve all come together,” Laughlin explains, further suggesting that such a program is made possible in a small town by “rallying the troops.”

Laughlin says they have also garnered national support from several large organizations that have offered discounts on products and donations. Several door and window companies are among those that have shown support, including Marvin through BMC and Guido Lumber Co., Andersen through Builders FirstSource, and Sierra Pacific Windows through Capital Hardwoods.

Casa Über Alles is also giving back to the door and window industry by focusing attention on training students at important trade skills, such as installation. 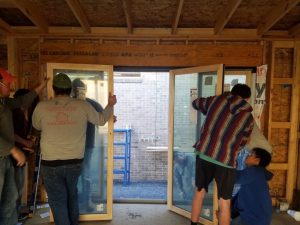 “Installation is one of the biggest things we’ve seen done wrong,” Laughlin says. “So we focus very heavily on teaching the proper way to do this. There is a real need for it in the market from what I have seen.”

While Laughlin says they have not yet begun to teach door or window manufacturing skills, they are interested in focusing more on this in the future.

Laughlin believes that meeting with the state governor and earning the 2019 Fred Case Award for Entrepreneur of the Year has contributed significantly to the rapid growth they are seeing as the program begins to gain recognition on a state and national level. He has traveled to several schools in Texas to pitch the program and three so far are launching their own versions, while another couple traveled from Georgia to learn more and take the program back to their state.

“We’ve got big aspirations for this, and we are committed to making this work,” Laughlin says. “There’s a real need and we believe we can provide solutions.”