GPAD Keynote: Glazing’s Role in Energy Consumption and What Can Be Done 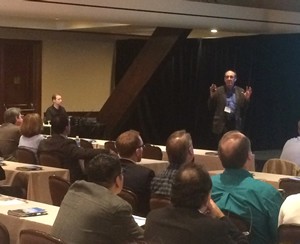 Buildings account for most of the energy consumption in the United States, and innovations in glass can help curb that trend. Stephen Selkowitz, senior advisor of building technology and urban systems at Lawrence Berkeley National Laboratory, discussed the topic Tuesday during his keynote speech at Glass Processing Automation Days (GPAD).

The conference is being held at the Catamaran Resort Hotel and Spa in San Diego.

“Why are we picking on windows? Why not cars?” he asked rhetorically after opening his presentation on the issue of carbon emissions. “Well, because buildings use more energy than any other [sector] in the country.”

“So what do we do with windows, glass and facades?” he said.

He showed an image of a “code official’s view of windows in 1970,” which was a brick building with brick-filled windows. “Fast forward to 2016,” he said, showing various examples of new construction using large spans of glass and glazing.

He said it is possible to design fenestration systems that will outperform insulated, opaque walls. The challenge is optimization.

The role in achieving net zero through facades is to reduce heat losses so ambient solar energy balances and exceeds loss (in heating climates), reduce solar loads and provide ventilation (in cooling climates), and to replace electric lighting with daylight (in all climates). Additionally, photovoltaics in the building skin can provide a power source.

Selkowitz discussed various types of glazing systems. “The problem with triples is that they weigh a lot, and they’re wide,” he said.

One ideal solution, which he has tested and modeled, is using thin glass in the middle of the insulating glass unit. That comes with its own challenges, however, such as fabrication and glass handling, as well as assembly and edge spacer design.

He’s also done modeling with vacuum insulating glazing. “This is another promising approach,” he said.

He discussed dynamic control of windows, balancing cooling, daylighting, view and glare, as well as active and passive shading options.

When he discusses that idea with architects and points out the various solutions, “at first they say it’s too complicated and expensive,” he said. However, he noted the relative cost and complexity of generating electricity from a nuclear power plant for heat, cooling and light compared to getting heating savings from high-R windows and cooling savings from automated shades.

He also used the example of integrated systems in cars. “We can build integrated technology with cars, but you’re telling me we can’t make automating shades to go up and down?” he said.

One key challenge with an integrated façade is the sheer number of players in various sectors.

For example, with 20 glazing/curtainwall suppliers, five smart glass suppliers, 30 shading suppliers and 50 lighting fixture/control suppliers, you can get 150,000 possible combinations. He said collaboration and communication between various industries and technologies is key.

Overall, innovation must be driven by “some kind of comprehensive program” consisting of people, technology, policy, market economics, innovation and processes.

He added, “We need some kind of win-win,” which new technology and smarter design can accomplish.

In developing innovations, the manufacturer can benefit from new business opportunities, the architect gains design freedom and flexibility, and the occupant and owner receives value-added benefits and energy cost savings. Additionally, Selkowitz said, society benefits from a “lower impact on the global environment.”

Stay tuned to USGNN.com™ for continued coverage of the GPAD conference, which continues through Wednesday.