The 13th GlassBuild show kicked off on Wednesday at the Georgia World Congress Center in Atlanta with hundreds of exhibitors and attendees flooding the show floor for a look at the latest in door and window products. 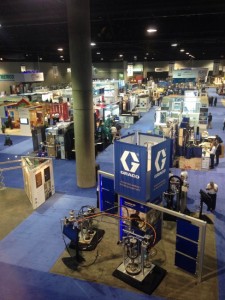 The company also showed off its Mikron C3-1130 AW-Rated window system, which it says is the first and only operable non-metallic window and door system to meet and/or exceed all necessary requirements for AW ratings governed by North American Fenestration Standard (NAFS). It’s available in multi-lite configurations.

Quanex also showed off its MikronWood windows, which are made from a composite frame material that’s a blend of thermoplastic alloy resins that includes both polyvinyl chloride (PVC) and acrylic-based polymers. The combination doesn`t absorb moisture, so it resists rot, mold and insects, the company says.

Caldwell Manufacturing showed off several products, the most unique of which was a folding window that it makes in collaboration with Rochester Colonial Manufacturing that looks like a double-hung window but operates very differently – it flips upward. Caldwell provided the hardware for the unique window.

Lawrence Industries displayed several new products, including its RoBo-Shot auto lock for windows, its new Horizon series sash locks, and some new finishes for its hardware, such as brass and brushed nickel.

Solar Innovations showed off its pivot door (SI3000P) and its folding glass wall systems (SI3000 and SI33000). “There are our bread and butter,” says the company’s Eric Wanner.

Equipment manufacturer Graco showed off its Therm-O-Flow Bulk Hot Melt System for both primary and secondary sealing applications in the glass industry. Therm-O-Flow can be configured in many ways to meet the needs of the window and glass industries, says the company’s Katie Brockhaus.