While GlassBuild has drawn the latest machinery and other fenestration-related products to Atlanta this week, where exhibitors hope to catch sales, not everything that finds its way onto the show floor is outfitted with a price tag. Manufacturers also aim to use the event as a testing ground and an incubator for concepts.

Testing equipment manufacturer EDTM shows up each year with a new tool—this year including a handheld device that detects the presence of bird deterrent coatings on glass. But co-owner and vice president Mark Imbrock says his company is also at the event to gather input for EDTM’s next inventions. “Our ideas start here,” he says, of trade shows. 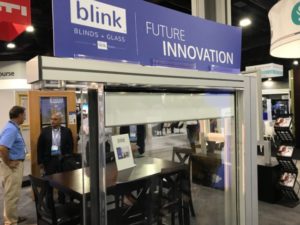 With displays set up for yet-to-be-released products, exhibitors have a chance to gauge interest, while hoping to pen the sorts of deals that can make them a reality.

ODL is allowing attendees to test its new raise, lower and tilt function for blinds between glass (BBG). On your way through the booth, however, you might also notice an automated version of the product. The company’s motorized blinds look like a finished product; in reality, they might not find their way to market for another two years, says Roger Finch, head of marketing.

“We’re feeling out the interest here, more than anything else,” Finch says—including what ODL’s customers might be willing to pay, he adds.

“I have a whole list of ideas that I carry on me,” says Glen Paesano, vice president of sales and marketing for hardware maker Vision Industries. “But I never build anything until customers say they want it, which I find out here.”

Last year, Paesano planted the seeds for a new tilt-latch system that doubles as a window opening control device (WOCD) for double- and single-hung windows. The idea first came to him, he says, three to four years ago.

“Any hung window can now incorporate a latch, lock and WOCD into it, no matter how little space there might be in the upper sash,” he says of his company’s new multi-function hardware.

By sliding two latches incorporated into the top right corners of a window sash (where most tilt latches are expected to be), homeowners can open their windows to a safe (WOCD compliant) opening. Sliding the latches a second time allows for the window to be fully opened. The same hardware locks the windows, precluding the need for center-mounted hardware, as well as activates a tilt function.

While Paesano says he keeps his ideas neatly tucked away in his head, others choose to display concepts out in the open—partly to lure early feedback. 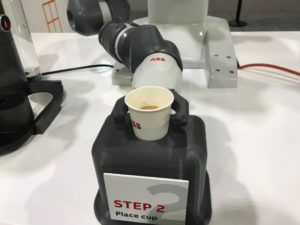 Of course, not every idea and eye-catching technology is geared for sales. Some are designed simply for luring attendees in.

GED created some ooh’s and ahh’s in its booth with a robotic barista. But the technology does more than serve up coffee; it also serves as a perfect segue to the company’s machinery—some of which utilizes the same technology, says Laura Fiegelist, the company’s marketing communications coordinator.

Last year, GED made a buzz with Roboseal, a fully automated insulating glass manufacturing line, which proved tantalizing, but wasn’t up for sale yet. At this year’s show, it was officially made available.