GlassBuild Gets Moving with Machinery, More

The 14th GlassBuild America show opened its run at the Las Vegas Convention Center today, and more than 400 exhibitors representing every aspect of the fenestration industry welcomed thousands of attendees. 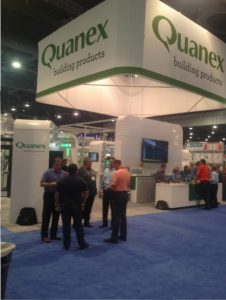 Quanex has one of the largest booths at GlassBuild, which runs through Friday.

Machinery and equipment always have a big presence at GlassBuild, and the exhibition hall was filled with companies in those fields showcasing their products.

Wakefield Equipment showed off its K-29P vertical stretch wrapper, plus a line of equipment from TigerStop.

Erdman Automation brought its high-speed parallel process IG line to GlassBuild. The machine can produce a unit in less than 19 seconds with only three to four operators, according to the company.

“We use one-fifth the energy of a standard heated roll press,” said Erdman’s Morgan Donohue.

“A lot of window companies or glass fabricators will have racks that never come back to them, and some of those racks are worth $1,000 or more,” said the company’s Dave Thoman. “This can be something they take a deposit on, and if they get it back, they do, or if they don’t, they don’t.”

Leading Edge shared booth space with Integrated Automated Solutions, which showed off its OptiGas gas-filling system for IG units.  It also displayed a new glass-loading system that the company’s Ryan McHugh says allows a business to store two to three times as much glass in the same square footage as most current systems.

Additionally, a couple of makers of profile bending machinery, Boschert Precision Machinery and J&S Machinery, were also at the show.

“It’s a product that really hits all facets of the market,” said Saul Schnurman of Quanex. “It can be used for new construction, or it can be used for renovation and remodeling. It’s our top of the line in terms of performance and cost.”

While the show was just beginning on Wednesday, many exhibitors said traffic was strong early in the day.

“We’ve had a fair amount of traffic so far this morning,” said Todd Tolson of Pro-Line Automation. “We’ve seen a lot of people we don’t know stopping by, which is good.”

“We’ve been extremely busy so far,” he said.