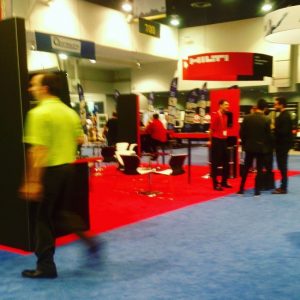 GlassBuild America finished a strong run at the Las Vegas Convention Center this week, and nearly every exhibitor reported heavy booth traffic and lots of leads.

“Yesterday was probably one of the busiest show days we’ve ever had, and it was Day 1,” said Mark Imbrock of EDTM. “For a while there, we had 15 people standing inside our booth and about 30 people standing outside. It was as busy as we’ve ever been at a show.”

“It’s been amazing,” said Lori Lyon of Ramapo. “We still had a lot of people in our booth when the show closed.”

The products on display played a big role in drawing the large crowds to the show.

For example, McKeegan Equipment showed its Accu-Tec computerized feed-through system for notching, pinching and crimping spacers and muntin. According to the company’s Colleen McKeegan, the machine helps minimize waste in the shop.

Sturtz was another machinery company with a hopping booth. The company brought its SMI-VSM 30-25 turbo vertical high-speed four-point welder to the show.

Canadian machinery makers Ameri-Can displayed a 32-inch miter saw that the company’s Grazio Sangiuliano said was the largest saw on display at GlassBuild. He added that the show was a big success for his company.

“It’s been very good so far,” he said. “We sold all the machinery we brought right off the floor. We’re very happy.”

Lamatek’s booth featured a creative election theme with the motto “Team Lamatek.” The company also displayed its line of foam sealant tapes, including Sure-Seal, which can mold to irregular substrates and last for more than 20 years.

“It’s a really exciting product for us because it’s basically less waste and more product in the drum for our customers,” said Fenzi’s James Rodo. “We were very pleased with the turnout so far.”

Automation is becoming increasing popular for homeowners, and Caldwell Manufacturing’s booth featured plenty of examples of hardware for that purpose.

“We continue to enhance our automation platforms,” said the company’s John Kessler. “At one point in time, it was only for large doors, but we’re now working on introducing a patio door application, a hung window application and a projected window application, including things like phone apps and smart home solutions.”

Kessler said Caldwell will be introducing many new products in the first half of 2017.

FDR had one of the more unique small booths at the show. The company, which specializes in upgrading older gas-filling equipment, showed off a gas sensor that goes inside an IG unit to measure the levels of argon or krypton gas, humidity, temperature and pressure to test for seal integrity.

“Initially we’re thinking the market will be for certification,” said the company’s Dan Haglin. “The windows are going in for certification, and you put one of these inside and it gives you a very high degree of accuracy.”

Hornschuch showed off its new Jet-Black laminate, which the company’s Marco Patermann called the darkest black available on the market. He added that it has the lowest heat build-up in the industry, staying 30 degrees cooler than competing products. Hornschuch’s booth also featured a Fux profile laminating machine, which Patermann said had been sold that very day to Ohio-based Gilkey Window.

Origin displayed an aluminum thermally broken bi-folding door system with an eight-point multi-lock. It also features proprietary hinges and hardware. The door is bottom-running, which eliminates the need to reinforce the header, said the company’s Nelson Russo.

Ric Pries, a sales rep for Skyreach, said the company was showing off its 110 series, which can be metal- or non-metal clad.

“This will help companies with inventory reduction, and they don’t need special equipment,” he said.

P.H. Tech also had a selection of patio doors, including a tilt-and-turn product line and a parallel sliding door.

The 2017 GlassBuild show returns to Atlanta next September.