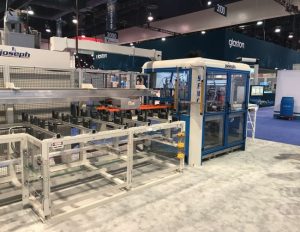 As the industry faces labor shortages, companies like Joseph Machinery seek to remove employees from the equation with more automation.

It’s the final day of GlassBuild and two topics that continue finding their way into conversations include tariffs and labor shortages. But it isn’t all gloom and doom in the process. We managed to track down several companies for which those topics carry silver linings.

Representatives for American Renolit, Deceuninck, Energi and Lawrence Industries all say that—so far—they’ve managed to avoid any collateral damages from tariffs, based on the materials they use and, in some cases, where they operate. But at least three of those companies also report that they believe tariffs give them distinct advantages over some of their competitors—many of which haven’t dodged the same bullet. Brandon Lawrence, vice president of marketing for Lawrence Industries, says that by utilizing glass-filled nylon and sticking to U.S.-born materials, his company doesn’t have to worry about it. “And that gives us an advantage,” he says, over companies that utilize materials like aluminum and steel.

But there’s another area in which Lawrence Industries has a secret “formula,” he adds. And that’s in how it utilizes its labor.

“We have this secret sauce in our [geographic] area,” he says. First, the company is based where once there were numerous furniture factories, which gives it access to leftover workers. At the same time, “Injection molding isn’t very labor intensive or skilled,” he says, “so just about anyone can do it.” Instead, his company’s products mostly require assembly, much of which happens in at-home work arrangements.

The strategy of using in-home labor began as a means for competing with inexpensive, offshore manufacturers, Lawrence says, but that arrangement now enables the company to deal with labor shortages.

And, so, every morning, Lawrence Industries’ building is wrapped with cars, lined up to receive parts through a “drive through” arrangement, he says. In the evenings, those same lines are filled with workers dropping off finished products.

“This was the plan from the beginning,” Lawrence says. “My father designed it this way.”

Other companies are finding their niche in a period of labor shortages by using the issue to drive innovation. Sanjay Parikh, vice president of operations for Joseph Machine Company, tells DWM that his company spent the past year working on concepts for new, fully-automated machinery lines, designed to replace up to six workers.

“The industry is forcing us to do this,” Parikh says. “We’ve got to do it.”

The machine, dubbed Autonomous Cell Evolution, integrates robotic handlers to load, cut and sort components to the tune of 480 window units every eight hours—a task that he says typically requires at least four individual machines and an equal number of workers (though more like five or six in most cases, he says). His company’s design, Parikh says, will require only one person to follow onscreen instructions, loading materials as they’re requested by the system—a job that doesn’t take a particularly high degree of skill. “One person loads the material,” he says. “That’s it.” And by eliminating three full-time positions, Parikh estimates that ACE would generate a return on investment over an 18-month period.

But by now you’ve likely noted the use of words like “will” and “would.” That’s because ACE is currently just a prototypical idea. The machine doesn’t yet exist. And that was one of Parikh’s primary objectives for GlassBuild: finding a company that’s willing to invest in the idea.

With a sponsor now in tow, Parikh says his company’s new goal includes returning to GlassBuild in 2019 with a fully-working prototype, ready to offer for additional buyers.

Other manufacturers have their concepts fully completed and ready to fill in behind missing workers, including AquaSurtech OEM, which recently debuted its FlamePro and LH1100 machinery, which prep and paints doors without involving any human labor.

“The problem in the door business is—in order to prep and finish doors, there’s a certain amount of skilled labor required,” says Michael Braeuel, the company’s president. “Our products extract the human from the equation.”

While prepping doors doesn’t necessarily require a high degree of skill, he says, painting and staining do—especially when done properly (which he says is by hand). Those processes also are extremely time consuming. Meanwhile, with the current labor shortages, especially, some door providers may have trouble finding and keeping qualified painters. By combining his company’s FlamePro machine (which torches doors to remove impurities and contaminants) with its LH1100, a fully-automated painter, companies can produce prepped and painted doors in a matter of six minutes—all without involving any humans in the process (except for material handling).

Those are the types of innovations, some suggest, that door and window companies will need to converge on in order to cope with labor shortages. And there were plenty of examples to stew on at GlassBuild.

Exhibitors say they watched the show fizzle in its final hours yesterday. And in its final day the show floor reached a crawling pace (which isn’t highly unusual). But so far no one’s complaining, as in its first day and a half, we’re told it produced enough attendees and deals to make the trip to Las Vegas well worth it.