Day two of GlassBuild America took off to an early start for some attendees, including those visiting an industry update breakfast hosted by Building Industry Advisors. The by-invitation-only event was held at the Westgate Las Vegas Resort and Casino, where it drew the attendance of around 20 industry executives. Host Michael Collins, DWM blogger and managing director  for Building Industry Advisors, opened the event with a macro-economic overview of the economy, followed by a focus on how door and window companies might increase their value propositions amid tight labor markets. 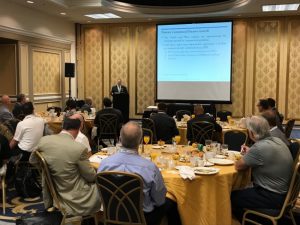 Many got up early to learn the latest industry outlook at an event held by Michael Collins, Building Industry Partners.

Overall the message from Collins was good, including indicators like high consumer confidence, job increases and tax cuts that he says provided a boost to the economy in 2018.

“Regardless of how you feel about Washington these days, there’s evidence that the recent tax cuts provided some benefits to our economy,” he says, pointing to a jobs market that’s gaining at a rate of around 200,000 positions per month, which he suggests indicates a self-sustaining economy. Other positive indicators include steadily recovering construction markets and corporate profits, which remain on an incline. Regarding the prospects of another recession, Collins says, “None of the things that drove the last recession are happening right now. Even Millennials are making five to 10 percent down payments on homes.”

That’s not to say that the door and window industry isn’t facing challenges; most notably, Collins points to labor shortages and tariffs. In Q4 2017, a 20-percent tariff on lumber imports, for instance, will have some impacts on construction, along with a 10-percent tariff on imports of aluminum products in Q1 2018, which he suggests led to an overall increase of 20 percent in the cost for aluminum profiles. But the latest onslaught of tariffs, he suggests, is expected to cool. “Eventually, at some point, one side or the other declares it’s won and then everyone moves on,” he says.

In terms of how door and window companies can offer value-adding propositions amid labor shortages, Collins suggests keying in on measures that help in the areas of assembly and installation, where door and window contractors are hardest hit by a lack of qualified employees. Suppliers can start with simple measures, like more prepackaging of complete products, which makes moving, assembling and installing products an easier proposition.

Following the update, attendees filed into the exhibit hall, where this year we found numerous companies shopping machinery—especially those offering increased automation. Billco debuted its new Remnant Storage Solution, a fully-automated, module-based setup that recovers, stores and automatically catalogues glass remnants. By the time we reached Billco’s booth, already the display had a sold sign on it.

“This is the first one we’ve ever offered and it’s already sold,” says Danielle Blewitt, marketing.

While the floor model wasn’t fully functional, a video rendering displayed how the six-module unit recovers and stores glass, electronically tagging each piece for later use, while also cataloguing its location and dimensions. Pieces can then be selected and automatically returned to the fabrication process, based on glass type and dimensions.

“You don’t have to acquire all six modules either,” Blewitt says. “Depending on space and needs, you can select only the ones you want.” Storage racks include 75 slots, she says, but storage modules also double as shuttles and can be combined together for additional storage.

In the Quanex booth, the company announced that its Modlok folding door system would now be available in the U.S.—a product that was previously only offered in Europe. Company officials say that Modlok is the first of its type to combine the structural benefits of aluminum with the thermal benefits of vinyl into a single bifold door system. The product is also promoted for its security features, including a multi-point locking system and aluminum reinforcement that “puts all of the right structure in all the right places,” says Paul Garforth, technical director for Liniar U.K. (part of Quanex Building Products Group). Modlok’s outer frame and sash also are capable of supporting triple-pane glazing, Garforth says. But it was another small feature that we found particularly interesting—especially for door and window contractors and dealers—and that includes a folding key that’s designed to remain in the lock, without damaging glass or frames when the doors are folded. (That might prevent a few callbacks.)

“We’ve found that a lot of people like to leave their keys in, where they can cause damage when doors are folded,” Garforth says.

Another product on the display at the show worth noting, especially for contractors, includes Guardian Glass’s Vacuum IG, which company officials say is the first vacuum IG product to incorporate tempered glass. The product is initially for commercial applications, but we stopped by to inquire about a transition to residential.

With R-14 performance and eight millimeters of thickness, Guardian’s new glass may turn out to be well-suited for projects involving historical windows. And Greg Kemenah, director of vacuum insulating glass says that, already, his company has the product tagged for those purposes. Exactly when the product might be available for residential use, he was unable to say, but he confirms that it can be directly applied as a replacement to existing window units, while providing a thickness that’s similar to single pane.

Meanwhile, as the rest of the world was tuned into Apple’s big event, where it announced the latest, greatest iPhones, here at GlassBuild another tiny device seems to be drawing the attention of a lot of glass professionals: low-E detection devices that are the size of just a credit card.

Designed to easily fit in a pocket or even a wallet and as a low-cost option for factory, field and sales teams, the AE2200 Low-E Card is designed to allow for up to 1,000 tests, to confirm whether or not a low-E coating is present on individual glass panes. Meanwhile, at roughly the same size, the AE2250 utilizes a replaceable battery to perform indefinitely. The AE2250 also adds the ability to differentiate whether coatings are applied to surface one or surface two. Both products are devoid of any metal parts that could otherwise scratch or damage glass and can be customized with a company’s logo and sales messages for branding.

We have one more day to go here at GlassBuild. Stay tuned to dwmmag.com for more coverage from the show and be sure to tune into our newscast for additional insights by video.