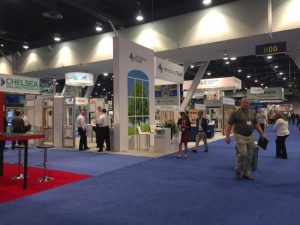 GlassBuild America’s second day at the Las Vegas Convention Center featured big crowds and a diverse lineup of products for the fenestration industry.

Chelsea Building Products recently rolled out its Inoview window platform, and it was a major focus at its booth. Inoview features multi-hollow profiles and the flexibility to work with most insulating glass packages.

Veka is another company with new products at GlassBuild. The company just released its Black Onyx window profile that the company says has improved UV reflectance compared to other dark colors.

“Preliminary numbers were outstanding,” said Veka’s Steve Dillon. “Customers have been asking for a true, true black, and it’s been very popular.”

The new product, which was produced in conjunction with Hornschuch, should be available in early January.

Veka also rolled out FeneXseal, a new co-extruded sealing technology that aims to improve air, water and sound infiltration in any door or window product.

Energi Fenestration Solutions displayed its Orchestra lift-and-slide patio door, which now features an aluminum-clad exterior. That option is expected to hit the market in the second quarter of 2017. The company also had its 4600 Series windows, which have a commercial performance rating and offer plenty of flexibility in design and materials.

GU Ferco’s large booth featured a battery-powered closing system for lift-and-slide doors that works with the touch of a button. The “smart” E Power system can open, close and lock itself, according to the company’s Charlie Maves. The company also showed off a new silent-close option for sliding doors.

Lawrence Industries’ booth highlighted its new shim jack, which has a shim, an anchor and a jamb adjuster all built into one piece. According to company president Barry Lawrence, it only requires one universal hole and prevents fabricators from not shimming the window. Lawrence’s booth also featured the best swag at the show: A red ballcap with the words “Make Hardware American Again” that mimics the style of GOP presidential candidate Donald Trump’s iconic “Make America Great Again” hat.

Kommerling brought its large lift-and-slide door to GlassBuild. The European door giant recently began manufacturing the product in Huntsville, Ala., for the U.S. market, and the company’s Gareth Parton said it’s starting to take off.

“The reception has been really good,” he said. “The product is getting more recognized now. We’re getting really good feedback.”

As GlassBuild heads into what’s expected to be a busy second day, exhibitors reported strong attendance and lots of contacts.

“It’s been excellent,” said Veka CEO Joe Peilert. “We’re pumped about the traffic, and even more so about the quality of the traffic.”

“The show has been spectacular,” said Jay Campbell of machinery maker Billco. “We had a great number of qualified leads that came through today looking for new machinery, and we couldn’t be happier.”

GlassBuild continues through Friday. Stay tuned to www.dwmmag.com for more from the show.