GlassBuild Day 1: All Shine No Rain 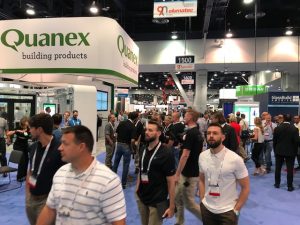 It was deja vu for any repeat attendees of GlassBuild America this year, with a major hurricane bearing down on parts of the country in the show’s first hours. Fortunately, that threat is far enough away from this year’s location in Las Vegas, that it hasn’t seemed to uproot any attendees or exhibitors (unlike 2017’s Irma). Instead, in the early hours of day one, it was right down to business.

With labor shortages bearing down on door and window companies in 2018, for some that business includes looking for ways to advance and keep pace through labor-saving technologies. And with everything from newly automated equipment to more advanced software, exhibitors are hoping to deliver on those promises. In booth 2127, we found GED unveiling a system, dubbed WinTrax Intelligent Logistics, that promises to reduce the amount of time and man-hours companies spend locating products.

Through a network of tags, GED’s new software allows door and window companies to track both window components and completed systems within residential vinyl window production facilities. The company is displaying phase one of its system at this year’s show, which keys in on the window frame production process, but company officials tell DWM that additional phases are slated for introduction in 2019.

“The system provides immediate pay back by realized efficiencies of not remaking lost windows and by providing the ability to get windows through production in a very predictable manner,” says Tim McGlinchy, executive vice president of engineering and research and development.

With WinTrax, depending on customer’s processes, window frames receive tags at the fabrication saw or welder phase of production, which can either be generated at the machine or in the production office as part of a report “packet” for each run. After tags are applied and entered into the WinTrax software, the system then tracks units through the entire production process. When a product doesn’t follow through with its correct sequence, operators are alerted to that error.

With at least one major acquisition keying in on western markets this year for door and window sales (PGT Innovations acquisition of Arizona-based Western Window Systems for $360 million), we weren’t surprised to find additional companies showcasing products aimed at those same markets.

Officials for Deceuninck North America (booth 1051) report that growth among Western markets is strong for that company, which it seeks to support with new product introductions and enhancements. Meanwhile, the company returned to GlassBuild with its Revolution XL Tilt and Turn door and window system (a product it debuted at the 2017 show), a tilt/slide door and terrace door that officials suggest is ideal for remodeling, replacement or new construction. But Deceuninck also continues to lean on the mantra of energy efficiency via its eos® window and patio door systems. One fact they aim to draw attention to at the show this year includes the fact that eos products meet Energy Star 6.0 standards.

In addition to touting existing products, there are, of course, countless new options at this year’s show—some of which we found to be more brand new than others. One of particular interest includes magnetically levitating door hardware.

Maglev Glide debuted its new track system in booth 876, which utilizes neodymium magnets to “hover” door operators the same way that “maglev” commuter trains operate. With no physical contact between the door and track systems, operation is made completely frictionless. If you’re at the show and have a chance to swing by the company’s booth, we feel it’s worth a glance to see these doors operate. Current applications include commercial doors, shower doors, barn doors, pocket doors and patio doors, but company officials tell DWM that the system is fully customizable.

Along the same isle, in booth 837, Roto North America is displaying another solution for enhancing sliding patio door performance, though it does not include levitating: Inowa, which we’re told stands for “impermeable, no water, no air.” Inowa combines convenient operation and high impermeability for sliding doors and windows made of timber, PVC and aluminum, company officials say. At the same time, the product’s hardware utilizes a concealed technology that allows for narrow and straight-line profiles.

After day one, GlassBuild is just warming up under Nevada’s 100-degree-plus temperatures and continues through Thursday. Stay tuned to DWM all week for more coverage from the show and be sure to tune into our newscast for additional insights by video.