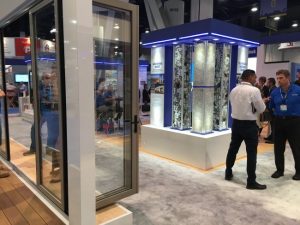 “We run this company on the voice of the customer,” added Greg Koch, vice president of sales and marketing. “It’s the brand of the people.”

Deceuninck CEO Francis Van Eeckhout was at the show to talk to customers to ask them what the company could do better. “They really have to think,” he said.

The company showcased its eos 8 foot door, a triple-pane product with slim lines. “A lot of people are signing on to make this door,” said Geeraert. Customers are also manufacturing the eos window as it allows them to meet Energy Star requirements.

The company also showed its PUR fiberglass option, and Geeraert pointed out everything that the fiberglass that into the manufacturing of that product goes back into Deceuninck products, such as corner keys, etc.

Deceuninck also told customers about its Impact products as companies continue to ask for that, said Koch. “You wouldn’t believe how many products in coastal areas are not impact,” he said.

Software supplier Fenetech introduced some new software modules this year and continues to have success with its line scanner.

“We have doubled the resolution,” said Ron Crowl, president and CEO. “Everything is getting bigger with the size of glass.”

He reports that both current and potential customers were in attendance and a good mix of window manufacturers and glass fabricators.

Haffner North America was at the show to announce its U.S. presence, which was set up three months ago, according to Michael White, vice president of sales and operations. The company is based in Istanbul, and has as a set up a distribution center in Dallas. He said the first day of the show was “fantastic. “We are hoping to build off that and further our brand building,” he said.

Canadian company 360 innovations showcased its software systems and Simon Labrie, marketing manager, was surprised that they had more leads from Canada than the U.S.

The contemporary look continues to take off and hardware supplier Roto displayed a new contemporary handle for its patio doors from the Roto Fasco brand. The handle works with a single or double point lock. The company also debuted a new casement program which makes it simpler for those companies who may wish to change suppliers. 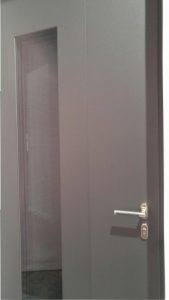 Slovenia-based PIRNAR had some impressive European technology on display.

Interlock was another hardware supplier in attendance, and this year they exhibited under the Assa Abloy brand. They introduced some new sliding door products which also included a contemporary handle. The Invisio line is a flush mount, narrow stile that allows both doors to slide,” said Axel Husen, president and CEO.

He also reported that the Securistyle line is having great success for both residential and light commercial applications, as these two markets continue to overlap.

In the window and door Dream Showroom Panda had automation on display with its Select line. The residential sliding door can be built up to 20 feet tall, has an aluminum profile, is self-closing and is thermally broken. The door is powered by technology from Summit Automation, and the motor is silent as the door slides. “As long as it slides we can automate it,” said Jeff Schockley, vice president of sales and marketing for Summit Automation.

Also in the showroom was Slovenia-based PIRNAR which had some impressive European technology on display. The company’s Lumir Hybel described the door “as a safe” as entry is based on the homeowner’s thumbprint. The all custom-made door is “number one in Germany for the high end and we hope to have the same success here,” he said.

The 2017 GlassBuild show returns to Atlanta next September.