GlassBuild America: International Show with a Focus on American Manufacturing 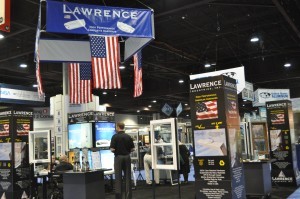 GlassBuild America may have international reach, but the resounding theme for many exhibitors is a focus on American-based manufacturing. While certainly not all exhibitors sported Made in the USA logos, those who did displayed it prominently and proudly.

Lawrence Industries Inc., based in Thomasville, N.C. branded its entire booth in American flags along with marketing materials declaring its American manufacturing. One handout reads, “At last you can make a window with 100 percent American-made hardware.” Lawrence is showcasing its Jamma Lamma, a jamb pocket mounted vent stop, and its Robo-Sync, a lock-activated tilt latch.

“A lot of other companies can’t get hardware because they’re working with hardware companies in other countries … American-made cuts lead times,” says Brandon Lawrence, vice president of marketing for Lawrence Industries.

Additionally, DAPA Products Inc., based in Jasper, Ala., displayed its foam screen splice, which the company also marketed as Made in the USA. The company says the splice is flexible and durable and is produced with only 100-percent virgin materials.

Not all exhibitors marketed their products as American-made though. Decoral System showcased its wood-grain powder coating technology, while Savio/American Douglas Metals displayed its fixing kit with special screws. According to the company, the Savio Fixia screw increases the capacity of hinges and reducing the aluminum profile. The screw fastening system can support 1,230 times its weight, according to Savio.

An improving market was also another trend for day one, with many exhibitors across the board reporting solid sales for the past year or two.

Stay tuned to dwmmag.com for the latest updates from the GlassBuild America show in Atlanta.