Downtown Atlanta turned into a swarm of green, red and black Sunday evening, as the hometown Falcons took the field against NFL division rival Philadelphia Eagles. Somewhere among that sea of jerseys were 85 door and window dealers, arriving two days ahead of GlassBuild (opening today) for Window and Door Dealer Day (WDDD). Held Monday and hosted by Window and Door Dealers Alliance, the gathering co-locates with GlassBuild each year, incentivizing attendance by dealers, distributors and others looking to earn their business. 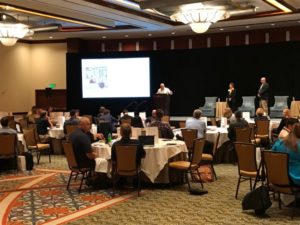 The GlassBuild conference starts today and runs all this week, Sept. 17-19.

Following a narrow four-point victory the night before for Atlanta that gave football enthusiasts every reason to stay up and stay tuned, show officials joked, as attendees trickled in an early morning awards ceremony and breakfast, eventually filling the room for most sessions.

Latching onto the theme of competition, “Do you feel like you’re better and worth more than other competitors?” asked the event’s keynote speaker, Rich Harshaw, CEO of Level 10 Contractor. The majority of hands raised.

Companies that have the best products and services that go a step above are those that come out ahead these days, even when priced higher, Harshaw suggested. But marketing those strengths ahead of the first point of contact is critical to drawing the right customers, he said, who should know what to expect.

“Wouldn’t you be surprised if you went down to the local Toyota and Lexus dealer and discovered that Toyota was more expensive?” he asked.

Meanwhile, no matter how solid a dealer’s customer base might be, “You can’t assume that because you’re a long-standing family business that that’s going to move the needle these days,” Harshaw advised. “To get from $3 million to $10 million, you’ve got to do more than rely on repeat business.” 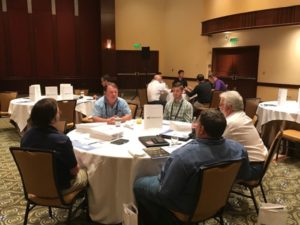 The $10 million mark is one that only a small percentage of dealers reach, Michael Turner told [DWM]. For this reason, it isn’t surprising that WDDD has yet to fold mergers and acquisitions into its seminar topics, said Turner, who is an investment banker with The Jian Group, which covers the building materials sector. But that omission, he suggested, is less of an oversight, than a matter of circumstances.

“There are a lot of $100 million lumber and building material dealers out there,” Turner explained to a small table of attendees, but few door and window dealers reaching those proportions. For this reason, merger and acquisition activity has stayed out of this sector of the industry.

“But it needs to happen,” he suggested. “The owners of these $2 and $3 million dealers, some of them need to start thinking about their exit strategies.”

Not surprisingly, when you get more than a few dealers around a table these days, chances are they’ll end up on the topic of labor shortages—partly as a matter of commiserating.

“I live in a school district where 98% of high school graduates go to college,” said Mark Chapman, of Chapman Windows and Doors in Chester, Pa. While some might consider that a positive indicator for the success of education, from the perspective of a door and window company it’s deflating, he said.

“That’s too many,” Chapman said, suggesting that, in his area, the issue is compounded by peer pressure. “We need people to install doors and windows.”

The topic resurfaced repeatedly, even among sessions that had little to do with labor. Amid a panel discussion on digital marketing strategies and the use of video testimonials, panelist Angenette Natkowski, general sales manager for Salem Media Group, suddenly pivoted to labor shortages, suggesting dealers could also use videos to solicit employees.

“Your best employees are your best promoters,” Natkowski said, suggesting that dealers post short video testimonials for what it is like working for their businesses.

“Is anyone having issues with labor?,” asked Grant Farnsworth director of business strategy for The Farnsworth Group, somewhat rhetorically. The room filled with laughter, as dealers commiserated.

For coverage from the show floor for the opening day of GlassBuild, see dwmmag.com.