When the Glass Association of North America (GANA) divisions and committees met in Toronto last week for the group’s Fall Conference, members had plenty to discuss. Those in attendance covered topics ranging from ongoing interest in Building Information Modeling (BIM) to codes and standards, energy performance and more. 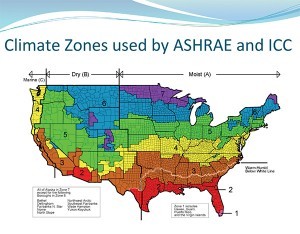 In the Energy Division meeting, Tom Culp with Birch Point consulting, who serves as the GANA energy codes consultant, gave an update on what’s happening in terms of codes and standards. He said states are considering adoption of the 2015 IECC on the residential side, while the commercial side is seeing activity around the 2016 edition of ASHRAE 90.1, as well as the IgCC and ASHRAE 189.1.

Speaking of ASHRAE 90.1 he said the biggest issues involve U-factor solar heat gain co-efficient (SHGC) and possibly visible transmittance (VT)/SHGC. Looking at performance and cost effectiveness calculations, but the focus is on lower U-factors in Zones 4-8.

Other issues being discussed at ASHRAE include requiring a certain amount of floor area to be in daylight zones and/or certain amount of lighting to be daylight controlled, as well as corrections being made to the SHGC credit for exterior shading. He said they are also looking at clean up to building/window orientation requirements. He added it’s “important to note GANA and the Aluminum Extrusions Council are the only window-related organizations with voting representation on ASHRAE.”

Within NFRC, this group is considering the use of a new standard solar spectrum for SHGC and VT ratings, which he said will have big implications for code compliance and product developments. If NFRC decides to make any change, it will be no earlier than January 2018 and would coordinate with Energy Star and the codes.

Also, he said NFRC is continuing to look at CMA improvements; improvements to CMAST software usability; and implementing changes to improve accuracy for low U-factor products. There was also a ballot to limit the use of the site-built program to encourage greater use of CMA.

She explained PCRs help ensure apples-to-apples data and that companies are measuring the environmental impact of products the same way. Saunders also said architects are increasingly asking about PCRs. “You have a PCR so everyone does the Life Cycle Assessment the same way; so everything is comparable to one another,” she said.