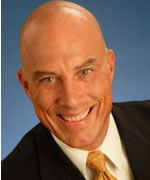 David Alan Yoho had some great tips for home improvement companies on how to canvass to gain leads.

“He’s probably the greatest script writer I know,” said Dave Yoho, president of Dave Yoho Associates, when introducing his son David Alan Yoho to attendees of a home improvement profitability seminar held recently in Fairfax, Va. He is featured on the series, Leads, Leads, Leads and the soon to be released video series: Super Sales Training.

The younger Yoho seems to know a thing or two about writing a script. He also feels very strongly about the importance of having a great script—and following it. “People have to be scripted,” he said. However, this is often a hard pill for a rep to swallow. “One hundred percent of people want to change the script,” he said.

David Alan Yoho took to the stage and got right down to business, first talking about some important items regarding leads, namely showing attendees his version of a Lead Source report. “I don’t know how you can operate a business profitably without this report,” he said.

Yoho also told the home improvement companies in attendance, many of them window companies, that “two-thirds of the people you get leads for are on the do-not-call list.” So he told companies how to get permission to call these homeowners.

“One company I know has 230,000 people in his database,” he said. “But he can’t call many of these because they didn’t do “permission marketing.”

Have a form prepared for a homeowner to sign, whether it’s an industry event, a home show, etc. Nine out of 10 will sign it so you can call them, according to Yoho. Tell them, “At x company we respect people’s privacy. Please — sign here so I can call you?”

Yoho then moved right into a session on canvassing, which he also referred to as “radiation marketing.” “Ninety percent of all canvass programs fail,” he said. “This should average 11-12 percent of your revenue but the average company spends 15-20 percent and sometimes more, which is too high.”

He also talked about “the nebulous (indefinite) lead.” He defines this as when a sales rep calls a homeowner before they are ready to buy. “They cost less than regular leads but they require more training,” he said. “They have a need but not the want–yet.”

So what if you approach a homeowner and they say, “Not right now?”

According to Yoho’s script it would go something like this: “I didn’t expect to catch you on the day you were going to replace your windows. Let me send one of my guys to inspect your windows so you are prepared when you are ready. Does that sound helpful?”

If they answer yes the rep continues, “The purpose of the visit is to answer your questions. The price will be good for one year. How does that sound?”

If they respond yes, keep going: “We need you to set aside 90 minutes whether we need it or not. The information works best when all the property owners are present. Easy enough?”

“Set and sit within 72 hours,” said Yoho. “That’s our mantra. Every time you reschedule an appointment, the probability of a sale goes down 50 percent.”

The importance of following such a script is “non-negotiable” and personnel must learn it early “This is the first thing they have to know. You need to teach them this in day two,” he said.

Some other tips for reps to follow: Personalize every contact, for example, I met you at x home show.

He added that most of the time the homeowners will go back to, “I am not ready” and that’s when Yoho said it’s time to “go back to the problem.”

For example, how old are these windows? Wouldn’t you agree that you will likely need windows in the next year?

“Do not attempt to set an appointment until the prospects have agreed on the need. If you can’t get that one it’s over,” said Yoho.

When it comes to interacting with potential customers, if you are making a phone call don’t say, Hi, is this X?” Instead, say, “Hi Mrs. I am X.” Don’t use sir or madam, he added.

“You are hiring salespeople who may not have manners so you need to teach them,” said Yoho.

But it’s not easy for the sales rep and Yoho admitted that two things that are happening in the industry.

“First, the difficulty in getting people to confirm an appointment,” he said. “That means the answer is probably no. The second is the number of people who will call to cancel – a contract.”

How can you help make sure the latter doesn’t happen? Install the job sign immediately, according to Yoho. “If you know I am going to put a sign on your lawn you will hesitate before canceling.”

Next, mail or drop a radiation letter (immediately after job approval) to 50-100 neighbors telling them that Mr. and Mrs. Jones are going to have windows installed. The letter should say that if they [too would like new windows but] can’t purchase them now the price is good for a year. Always include a reply card.

“You won’t get many back,” said Yoho. “A week before you will install, send another postcard saying we will be there on x day.

“When you see people watching at the end of the day go over and ask if they have any questions,” he said. “If you knock on ten doors you will find three to four people.”

If you don’t see people watching, then Yoho said to ask the homeowner which neighbors asked about the job? When you go talk to them, get right to the point, said Yoho and don’t ask people about the weather.

Finally, he said a sales organization is not a democracy.

“Your best closer goes out first,” he said. “You can’t run your business based on fairness. If your best has an appointment at 10 and they cancel then you have your best with nowhere to go.”