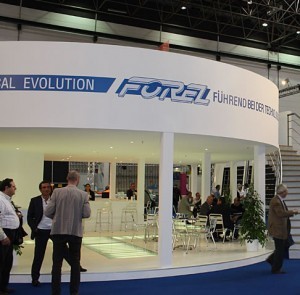 An improving economy and its vast potential have long made North America a coveted destination for Forel, so the Italian-based insulating glass machinery manufacturer has tabbed Mike Schmidt as the man to help make that a reality.
Schmidt will serve as general manager of Forel North America, the company’s first wholly-owned subsidiary outside of Europe. The new organization, which will focus on service, sales and support, is expected to be operational in the Minneapolis/St. Paul, Minnesota area by January 2014.

“It’s a great opportunity,” says Schmidt, whose 12 years in the glass industry includes previous stops at Lisec and IGE Glass Technologies. “It was just one of those instances where Forel has given so much consideration to this move for such a long time. They saw a lot of great potential in North America, so it’s really a commitment on [Forel’s] part to the North American market.”

Forel, which specializes in insulating glass machinery, will continue to manufacture its products in Italy, Schmidt says, but starting up an organization a continent away has its challenges, too. Schmidt expects to have a 5,000-square foot warehouse from which to operate, but says that recruiting the right “five or six” people to join him remains his biggest challenge.

Building on Forel’s reputation for high-quality products and service will be the new company’s primary mission, Schmidt says.

“Being able to do those things is what separates you apart in this business,” he says.

Forel had long considered the move into North America, but the recession that has blanketed the continent over the previous few years put those plans on hold. Company officials, however, saw an opportunity with things improving economically.

They first approached Schmidt early this summer with their offer to make him their point man in North America, and he liked what he heard.

“I was very interested once I heard they were committed,” Schmidt says. “They see vast potential and felt this was the right thing to do.”

Schmidt is wasting no time, with plans on being in an exclusive company booth in Atlanta for next week’s Glassbuild America show to both showcase all of Forel’s new products and pass the word about the company’s new North American enterprise.

“We have to support the market,” he says, “and that means being at the biggest glass show in North America. We’re going to be there consistently, showing our products and our innovative technologies. It’s going to be fun.”