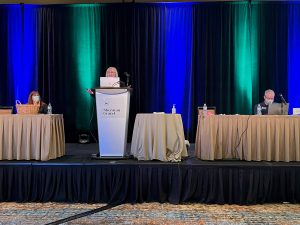 FGIA codes consultant Jen Hatfield provided an update on results from the Group A Public Comment Hearing (PCH).Proposals that did not receive public comment and therefore landed on the consent agenda are as follows:

• FS126–by Foam Sheathing Committee of American Chemistry Council (ACC), coordination proposal requiring water-resistive barrier (WRB) to be continuous to top of walls and terminated at penetrations; as modified, 13-0 at CAH; slated for final action as modified (modification was result of FGIA/WDMA collaboration);

• FS128–by Foam Sheathing Committee of ACC, adds another way for a water-resistive barrier (WRB) to comply, allowing a foam plastic insulating sheathing WRB system complying with s.1402.2 and installed in accordance with the manufacturer’s installation instructions; as submitted, 12-0 at CAH; slated for final action as submitted; and

Hatfield commented on proposal G9, saying, “I suspect we probably will see some future attempt to define flashing in a future code cycle, but it’s going to take a lot of negotiation between all those affected by the term. I think it seems to be quite a challenge to find a definition that suits all involved.”

The Glazing Industry Code Committee (GICC), National Glass Association (NGA) and Aluminum Extruders Council (AEC) submitted proposals G165 and G166 to the ICC during the latest cycle, promoting daylighting in classrooms using two different methods. FGIA supported both proposals, but both were disapproved by a 14-0 vote after unexpected opposition amid the first round of hearings. Officials for the Building Owners and Managers Association (BOMA) said they believed that the proposals would discourage electrical lighting usage. Representatives for the American Institute of Architects (AIA) opposed the proposal, too.

“GICC, the NGA and the AEC came back with a public comment for G165 only that addressed the concerns of many of those who were originally opposed at the committee action hearing,” Hatfield said. “But, unfortunately, AIA—the architects—remained opposed and although very compelling testimony was made, it was too much to overcome the disapproval. The public comment sustained the disapproval and both of these proposals are slated for disapproval as final action.”

During the afternoon session, a new process surrounding the International Energy Conservation Code (IECC) was also a focal point. “The ICC board determined that, for the International Energy Conservation Code (IECC), a standards development process would allow for additional time for debate, additional avenues to reach consensus and a continuous maintenance cycle to facilitate the ICC’s ability to keep up with the pace of changing technology,” Hatfield said.

The IECC remains a code, but it will now be developed under a standards development process, similar to the National Fire Protection Association’s (NFPA) National Electrical Code, per FGIA. The IECC maintains a three-year development cycle, consistent with other International Codes, integrated into Chapter 11 of the International Residential Code (IRC) and Chapter 15 of the ICC Performance Code. The 2021 IECC is a starting point for 2024 IECC revisions.

“The ICC has stated that this new process redefines the code scope and intent to better align it with communities’ energy efficiency and greenhouse gas reduction priorities,” Hatfield said.

The FGIA Fall Conference concludes today in Phoenix, Ariz., at the Sheraton Grand at Wild Horse Pass. Stay tuned to [DWM] for more news and reports.