The Fenestration and Glazing Industry Alliance began its annual Summer Conference yesterday—another event that’s presenting virtually as COVID-19 continues its hold across states. Originally scheduled to start Monday in Chicago, the event now lasts Tuesday through Thursday and is hosted over Zoom.

The need to prove its ability to work remotely comes at a critical time for the organization, as it shifts to virtual formats for everything from training programs and certification audits to meetings. Headed by Florica Vlad, FGIA’s meetings and events planner, the conference proved to be tightly run in its first day, coming off with few to no hitches—minus the awkward silence that now follows jokes and introductions without live, in-person audiences. That didn’t stop show officials from insisting on a round of applause for the event’s sponsors.

“As we have all struggled with these unprecedented times these last few months, this virtual event is an example of how we’re all coping with what could become our new normal,” said Donnie Hunter, FGIA board chairperson. “I look forward to the time when we can all come together in our old normal … and interact face to face.”

In the opening session, FGIA executive director Janice Yglesias provided an overview for how FGIA is proceeding with more virtual formats going forward, including its fall conference and training programs. The exception includes an upcoming fabricators’ workshop.

“As of right now, we are still planning to host the in-person fabricators’ workshop in November,” she said, though the event was listed as “tentative” on a corresponding slide. Should it proceed in person, the workshop will likely include a decreased number of participants, Yglesias said. In the meantime, the Alliance’s installation classes will be offered remotely—including required exams, which will be administered by live proctors.

As the organization proceeds through online programming, officials say they’ve compensated through pricing—in some cases offering programs for 50% less than the usual rates for participation. It’s those changes, combined with the elimination of travel expenses, that some organizations hope might lead to increased participation through online events. Case in point: In FGIA’s first ever attempt at a virtual gathering, the event garnered 350 registrants, Yglesias said, including around 100 new participants. At the same time, an onscreen poll showed that only 16% of yesterday’s attendees had previously participated in FGIA programs.

Meanwhile, as the Alliance moves to virtual audits for its certification programs, video remains the preferred method for gathering the visuals necessary for inspections, said Nathalie Thibault, FGIA technical manager, glass products and Canadian industry affairs. While pre-COVID-19, audits were conducted onsite, travel for those purposes has been suspended through the end of the year, she explained, for the sake of auditors’ safety. In cases where video is unavailable, “pictures and documents will also be accepted,” she said. Overall, current arrangements have been “well received by most plants,” Thibault said.

Regarding AAMA verification and certification programs, in many cases visitors are still unable to enter plants, said Jason Seals, FGIA fenestration certification manager. In a survey of nearly 200 companies, the Alliance found that, “In places like the Northeast and West Coast, it’s taken longer to accommodate visitors due to shutdown orders,” he explained. 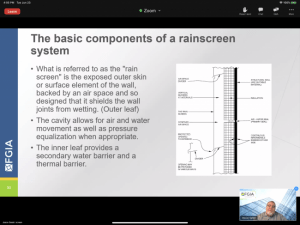 But travel constraints haven’t stopped industry organizations from proceeding with new programs—nor has it stopped them from forming. In a session covering the basics of rainscreens, FGIA technical director Steven Saffell explained that over the past year a new Rainscreen Association of North America (RAiNA) was formed. Discussions began “just over a year ago,” Saffell said, adding that, “AAMA at the time did [its] best to serve that need, but the industry had grown to the point where it needed its own association.”

The organization isn’t expected to compete with FGIA, so much as it will serve as a collaborator, Saffell said. “There is some overlap … I wouldn’t say that there’s a lot of it, but enough that we can have some influence—including two FGIA members that are on the RAiNA board,” he added. “They can be a competitor, or they can be viewed as an ally and something we can work together with … there are things, like codes, where we can work alongside together.” For this reason, Saffell urged support of the new association by FGIA’s members.

In an expected angle, throughout sessions topics centered on operating through challenges—a concept the event looked to reinforce through its keynote speaker: Dan Hampton, a former and 2002 member of the National Football League Hall of Fame.

“It’s a little weird,” Hampton initially said about the online format. “I’ve never given a speech this way …”.

Throughout his early life and across 12 seasons with the Bears, Hampton faced his share of trying circumstances, he assured, including when he was 12 years old and broke his leg, after which he spent five months in a wheelchair. That injury, he was told, would preclude any career in sports. The next year, he lost his father to pancreatic cancer, after which his mother worked 12 hours a day to make ends meet. In his presentation, titled “Importance of Leadership – Adapting to Change,” Hampton said, “I was almost always at a disadvantage, but always used that as a motivating factor.”

The event resumed on the topic of overcoming obstacles this morning, via a session on managing manufacturing operations and customer connections amid COVID-19. Look for additional coverage in [DWM]’s newsletter.